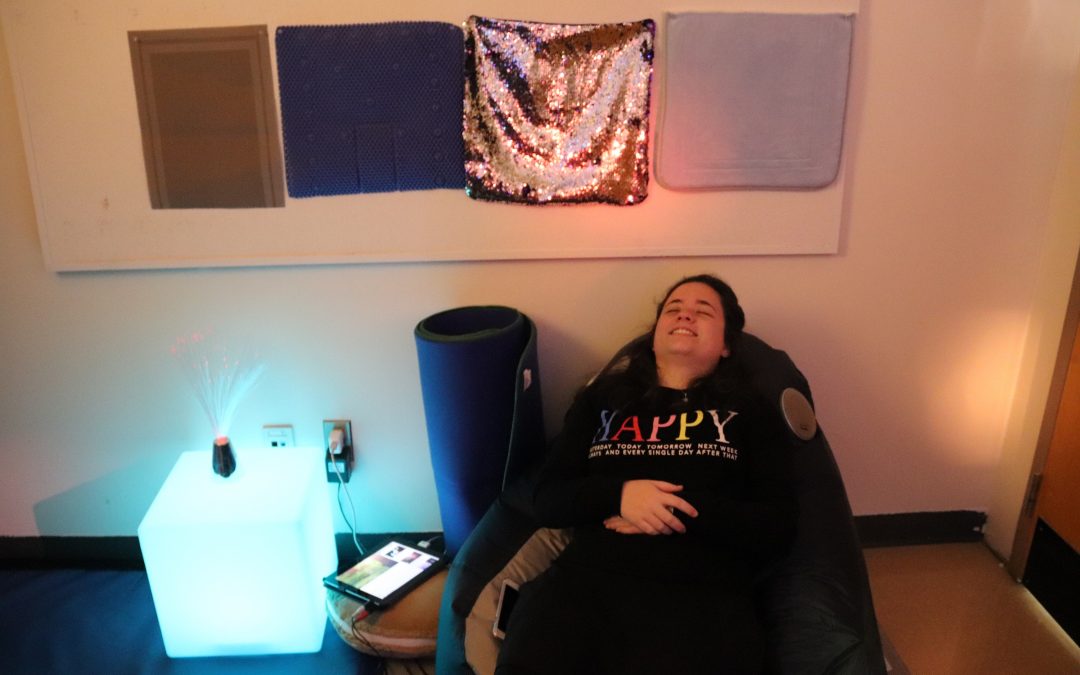 With social, academic and personal stressors, it’s not easy being a kid. Recognizing that we could all use a break from time to time, Elementary School Counsellor Shiri Benoualid and Acting Director of Academic Support Services Karine Plouffe came up with a wonderful idea: what if Hebrew Academy created an inviting space where students could go to unwind, de-stress and rejuvenate when they needed some time out?

The concept of a sensory room to stimulate the senses and calm people’s nerves is not novel; commonly used in geriatric, special needs and medical settings, the first Snoezlen rooms, as they are often called, were created in the Netherlands in the 1970’s. That Hebrew Academy offers such a unique resource for students – and even staff – is extremely exciting; some have even called the development “downright awesome”!

“There has been a lot of research on the benefits of such a space,” said Shiri. “Typically, you can find them in hospitals, clinics, even airports. More recently, schools began to create them. Depending on their budget, the space may be a room where a child can relax, or have more equipment such as swings, punching bags, and sensory items. Sensory rooms enable students to regain control of their emotions, to gain awareness of their senses and well-being, to improve focus through the use of sensory equipment, to hone motor skills through movement and balance, and to learn how to process and cope in situations where their reactions may otherwise be extreme. It’s great to help kids who have a harder time to self-regulate and those prone to feeling anxious (especially before a test or a presentation). It can also help them re-energize and increase their focus and motivation for learning.”

While the room is full of fun sensory objects designed to arouse the senses, Shiri emphasizes that it is neither a playroom nor a lounge but a therapeutic environment. All Elementary students (and perhaps High Schoolers, in the future,) may visit the space one at a time, accompanied by an adult who is trained in its operation. Children typically remain there between five and 20 minutes. In addition to Shiri, the entire Elementary Resource staff is proficient in its applicability and the ultimate objective is for all teachers, assistants and support staff to learn how to use the space to its full advantage.

“As the school counsellor I typically use my office as a confidential space to let kids talk and express their feelings,” said Shiri. “But the calm room is an additional space to express emotions nonverbally, through the body. Often, once the student has had a chance to explore the room both by letting out some steam and then calming down and taking in the sensory stimulation, they disclose themselves how they feel or what they felt before coming into the room – what brought them there, or anything else that’s on their mind. This is part of the benefit of the calm room – once the body and mind have had the chance to relax and release tension, the student feels more open to share emotionally.”

In the short while since it’s been open, Shiri and Karine have received overwhelmingly positive feedback about the room from students and staff alike.

“We have a great, open communication system among the teachers and staff,” said Shiri. “They often share which students they feel might benefit from the room and the experiences of those who have already visited. Students who came into the sensory room with little energy reportedly returned to class re-energized and ready to learn. We also check in with students around how they are feeling as they enter the room and how they feel right before leaving. So far, they have responded very positively, saying they feel more relaxed and calmer.”

Enjoy this tour narrated by Shiri!