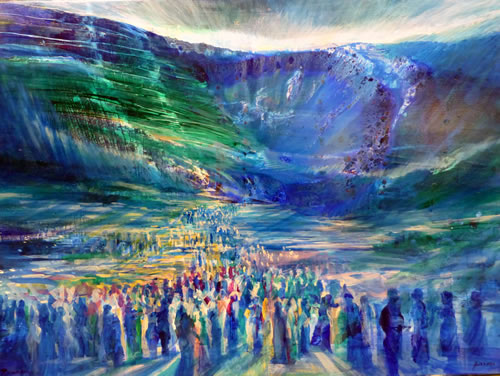 A few weeks back, one of my children showed me a meme of Michael Phelps swimming in one of his medal-winning competitions. The heading was something along the lines of “What makes a champion?”, but it was the difference between Phelps and the competitor that was remarkable. While Phelps was looking ahead, eye on the prize, in perfect form, the competitor, trailing him by mere inches, broke form to see where the competition was holding. Both men were facing the same challenge but their approaches were quite different in one essential area: Phelps’ competitor had a moment of doubt while the champion held strong, forging ahead with what he knew how to do best. Doubt, that instance of cognitive dissonance, be it from fear or insecurity, can mean the difference between winning or losing. As one psychologist described, there are four possible responses to doubt: fight, flight, freeze or pray. Doubt is inevitable, but our choice of response is the key to success.

In parashat Beshalach, Bnei Israel are in trouble. Free from bondage, they now find themselves with the Egyptians in hot pursuit, the sea before them, desert all around them and their leader, Moshe, deep in prayer. It would take very strong faith and deep spirituality to quell their mounting doubts. Our sages teach that the people actually split into four groups, each taking a different approach in the face of the situation they were facing. One group wanted to throw themselves into the sea, referring to the Torah. Essentially, they chose to close their eyes to what was happening. The second group was ready to surrender to the Egyptians. The cause is lost, we might as well give up! The third group took the attitude that if we are going to go down, it won’t be without a fight! The last group reached out to Hashem in prayer, opting to deal with the situation at hand in a purely spiritual way. Surprisingly, Hashem rejected all four approaches. In fact, He even tells Moshe “Why do you cry out to me?” (Shemot 14:15). The Midrash Rabbah continues, “My children have already prayed and I have heard their prayer”. Rashi suggests that Hashem is, in a way, chastising Moshe, to say that while His people are in dire straits, why is their leader standing here in lengthy prayer? “There is a time that calls for lengthy prayer and times when one must pray shortly.” Hashem is telling Moshe that it is a time for action, not for prayer. “And in any case, the outcome of this situation is not depending upon you, but on Me. As to what to do: speak to the Israelites and let them journey forth!” (Likutei Sichot).

When faced with this awesome challenge, Bnei Israel are being told that the answer lies not in escaping reality, nor in submitting to it, or even in the spiritual realm. The answer is to move forward. “And when you move forward… you will see that the ominous threat will fade away” (Lubavitcher Rebbe). Rav David Milston of Midreshet Harova summarizes Hashem’s meaning in a recent shiur quite succinctly: “This is not acceptable. This time the people are going to have to take some initiative. You start moving and only then will I intervene.” After all the miracles that Bnei Israel witnessed, after experiencing the “strong arm” with which Hashem took them out of Egypt, it would have become too easy to sit back and rely on Hashem to take care of everything.

There is a well-known adage that G-d helps those who help themselves. We first learn it from Yacov Avinu when he was preparing for his encounter with Esav. He had three strategies in the ready, anticipating each possible eventuality, one of which included prayer. Rabbi Beryl Wein said it best: “To accomplish things in life, both spiritually and materially, effort and planning, devotion and industry must be expended.”

Emunah, or faith, is facing our challenges head-on, deliberately, with forethought and planning all the while knowing that ultimately, things will work out as they were meant to since Hashem is the Ultimate Decider. We are all much stronger than we give ourselves credit for. We have gifts and inner resources that we must learn to develop and to harness and forge ahead, no matter how scary it may seem or how daunting things appear. In the end, it is never as bad as it seems and in truth, we were never alone!