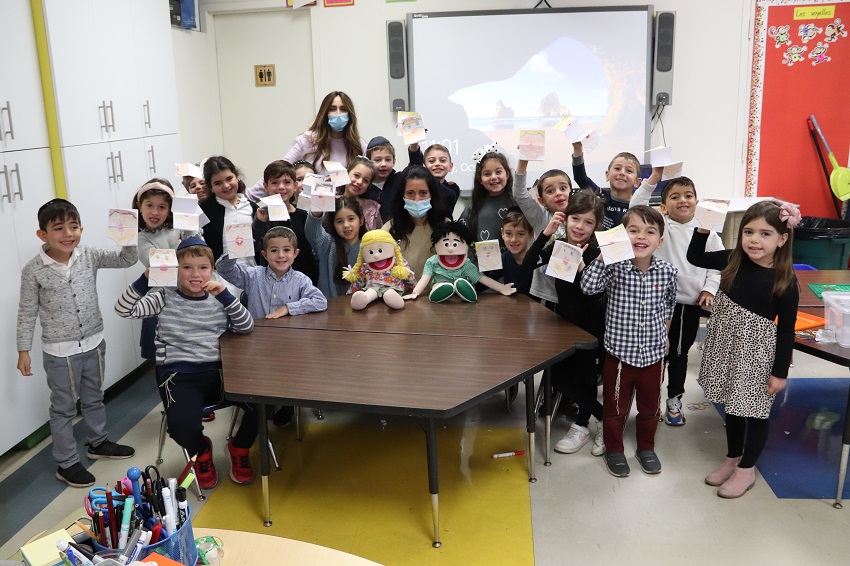 Mickey and Minnie, Peppa and George, Max and Ruby – all lovable duos that top kids’ lists of favourites. At Hebrew Academy, another adorable pair has won over the hearts of Kindergarten students: Mélissa and Daniel are vibrant puppets who lead rather busy lives, even by human standards. The unilingual francophone characters star in their very own videos and form the basis of the Kindergarten and Grade 1 French curricula.

“Mélissa and Daniel are part of the Hebrew Academy family,” said Elementary Vice Principal Dr. Miriam Schrager, who is also the Elementary director of French Studies and Academics.  “Our young students can really relate to them.”

Mélissa and Daniel are the brainchild of former Grade 1 teacher Nancy Heroux, who created them in 2002 in the absence of Jewish French-speaking characters. When Dr. Schrager joined her as a Grade 1 teacher in 2004, they developed meaningful didactic material for their students that centered on the Jewish lifestyle and holidays.

Heroux and Schrager bought puppets at a local bookstore and developed Grade 1’s French curriculum around them. While the Cycle 1 curriculum now centers on the Lilou textbook collection, Mélissa and Daniel make regular appearances during the Jewish holidays. In 2015, Schrager and French teacher Ilana Krief piloted a similar curriculum in Kindergarten, which remains in effect. Largely focused on vocabulary development, the program is based on thematic units that include activities and brief videos starring Krief and the puppets, voiced by Schrager’s daughter Sol Felsztyna, who is also a teacher.

After watching a film as a class, pairs of students scan the film’s accompanying QR code, re-watch it on their iPads, and respond to questions or repeat phrases as prompted. The children then complete worksheets and creative projects based on the video’s theme.

In the first film, “Je me présente”, the puppets introduce themselves and include such details as their ages (Mélissa and Daniel are both 5), their genders and their favourite activities. This week KA and B students created their own puppets based on the characters, which they presented to their peers.

In the years since they’ve been utilizing the puppets, Schrager and Krief have noticed a palpable shift in students’ interest and engagement in learning.

“Students’ relationship to the French language has changed,” said Schrager. “Daniel and Mélissa have opened their hearts and are positively influencing them to learn French.”

“There are also a number of students from other countries who had never spoken French before and they caught on so quickly and were eager to learn with their peers,” added Krief.  “We find that the puppets accelerate the development of oral expression.”

KA and B will soon explore “L’automne” and “Le goûter”, where they will learn about food names, milk products and the imperative to make healthy snack choices, just like their puppet friends. Those units will be followed by “L’hiver”, and, of course, “Hannouka.” The children will undoubtedly be very excited to celebrate the holiday together with Mélissa and Daniel — something made possible by their ingenious and dedicated teachers.