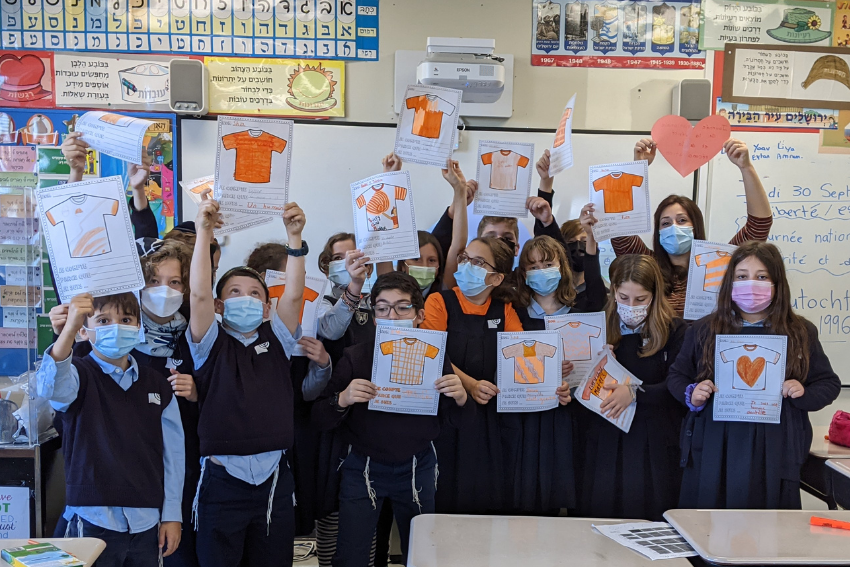 Grades 4 through 6 and a number of High School classes commemorated National Day for Truth and Reconciliation with memorable activities that paid tribute to the First Nations, Inuit and Métis peoples who suffered horrific abuse at Canadian residential schools between 1831 and 1998.

After viewing a film about Phyllis Webstad, a young girl from the Stswecem’c Xgat’tem First Nation whose new orange shirt and other belongings were confiscated on her very first day at a residential school, Mme Deborah Dortort’s 5A and B coloured orange t-shirts featuring the words “Je compte parce-que je suis…” Every student completed the sentence with a personal reason why “Every child matters”. Mme Choula Friedman’s 6B students also designed orange t-shirt cut-outs and were sensitized to the importance of respecting other cultures, as part of the Ethics and Religious Culture (ERC) curriculum.

In meaningful class discussions, Ms. Tia Ayrton’s Grade 11 and Grade 8 boys’ English classes shared previous knowledge of the residential schools and discussed the importance of reconciliation as a general principle and in relation to the Indigenous peoples. Students also read personal accounts and watched CBC interviews of survivors which underscored the enduring, intergenerational trauma that many still face today.

Meanwhile, Grade 8 Géographie students participated in a fascinating interactive lesson led by M. Simon Forget about the highly-derogatory and discriminatory portrayal of Indigenous peoples in 1951 history books, based on a Radio-Canada article. Students grasped the importance of learning about racism and stereotypes so as not to perpetuate prejudice in the future, and learned about why the day is also known as “Orange Shirt Day.”