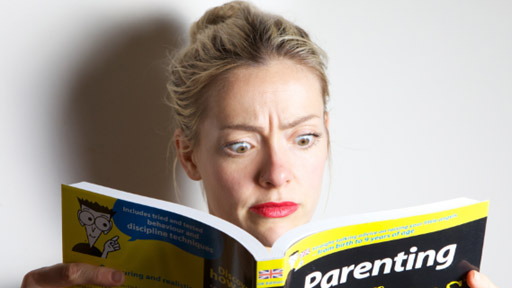 Imprinting is defined as the process whereby a young animal follows the characteristics of his or her parent after hatching.  It makes for great entertainment in the cartoon world; picture a dog accidentally hatching a nest of eggs only to find himself “mama” to a flock of baby geese who follow him everywhere. As parents we know that our children mimic our actions, often to entertaining results.  I still smile when I remember how one of my children had observed that I moisten one of my fingers to turn pages in my book.  Not to be outdone, he proceeded to lick the finger of his right hand, and, holding it in the air, turned the page with his left.  Well, he didn’t get it quite right but I realized how closely my children are watching me.

As parents we are riddled with all kinds of guilt.  Did we prepare them well? Did we teach them well?  Are we meeting their needs? Will they one day end up in therapy blaming their mother? Maybe that last one is just me, but the thought has indeed crossed my mind once or twice.  Rabbi A. Twersky, in his commentary on this week’s parasha, points out that while we may be riddled with guilt, we are also attempting to raise our children the way we were raised in a world that bears no resemblance to that of a generation ago.  “When parents have had good guidance and have been devoted to their children, there is no reason for them to carry guilt”, he writes.  “Parents can only do what they can. They have no control of outcome.” If we cannot control the outcomes and we cannot control the environment what are we to do? I would suggest we take a page out of Abraham Avinu’s book on parenting!

At the beginning of parashat Vayeira, Abraham welcomes guests in the famous scene of Hachnasat Orchim. He sees to all their physical needs, offers them plenty of food and drink, introduces them to all kinds of delicacies going above and beyond anyone’s expectations.  There is one little point, however, that sometimes gets glossed over probably due to how shocking it is.  Abraham Avinu basically told Hashem “hang on a second” and walked away from the Shechina to greet the travelers. Not only does Abraham get away with this, but Hashem even expresses his love for him later on.  The Talmud explains that welcoming one’s guests is a bigger mitzvah than welcoming the Schechina.

The Rambam explains that there are two forms of chessed: seeing to the needs of our fellow man and looking for ways to be helpful.  In the first case, chessed can only be expressed when someone is lacking. In the latter, chessed becomes a way of bestowing goodness onto others.  This is the type of chessed expressed by Abraham Avinu. In so doing, he is emulating Hashem and thus bringing Hashem into himself. Externally connecting with Hashem through prayer or even prophecy is only part of the equation. Case in point, Kayin, who spoke directly to God ends up killing his brother. By emulating Hashem’s kindness, by seeing to the needs of others and “bestowing goodness upon them”, one earns the love of Hashem.

So how are we to transmit these values to our children? The answer is simple, by practicing them ourselves. In the same parasha, The Torah teaches that Lot’s character was questionable, at best, as Rashi expounds “I (Lot) want neither Abram nor his God”. Yet, from years of being exposed to Abraham in his youth and having witnessed Hachnasat Orchim, Lot internalized this form of chessed and practiced it even when it would have been at great risk to him and his family.  Furthermore, exposure to lessons in chessed cultivated in him a desire to “do the right thing”.  It is for that reason that he covers for Abraham and Sarah to protect them from the Pharaoh when Abraham told the Egyptian that Sarah was his sister not his wife. This one act, the act of reaching beyond himself for the good of another, earned him and his family salvation from the destruction of Sodom (Beriechit Rabbah 51:8).

Abraham Avinu was one of the greatest men who ever lived, loved by God and father to an entire nation. What is it that made him so great that Hashem loved him? The answer is as follows:

“For I have loved him, because he commands his children and his household after him that they keep the way of God, doing charity and justice” (Bereishit 18:19). The quality that elicits Hashem’s love for Abraham is his ability to teach. Rashi defines hinukh, which appears for the first time in this parasha, as “setting in motion a process that will last a long time”. More commonly translated as “education”, hinukh implies setting the course for a lifelong process.  In Peninim on the Torah, the authors write “One’s real perspective on life is reflected in what he teaches his children”. For Abraham Avinu, those lessons were monotheism, chesed and kindness.  Our children are always watching and listening to all we say and do. As parents and educators we are “setting in motion a process for a lifetime”. May we merit to mechanchim as Abraham Avinu.