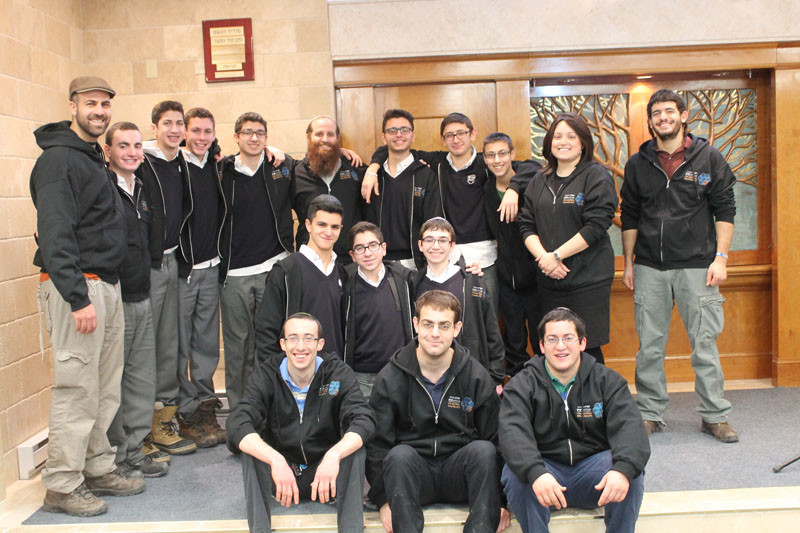 Beyond the all-too-familiar snow awaiting them when they landed in Israel this afternoon, a group of 10 Hebrew Academy High School students and their mentors were warmly welcomed by Yeshivat HaKotel’s Rabbi Ari Cutler and a number of his students. The teens are participating in Chalutzim, a  leadership program created with Montreal Kollel Torah MiTzion and Yeshivat HaKotel that includes a weeklong trip to Israel.

In partnership with Hebrew Academy and JNF, Chalutzim offers select students the opportunity to strengthen and grow their love of Torah, Am Yisrael and Eretz Yisrael via weekly extra-curricular learning and leadership experiences on a number of Shabbatot and Sundays throughout the year.

“In Parashat Matot we find the word ‘Chalutzim’ referring to the Tribes of Reuven and Gad,” said Rav Amnon Herman, Rosh Kollel Torah Mitzion. “They take upon themselves the role to lead Am Israel to Eretz Israel even though they plan on settling outside of the land, as it says in Bamidbar, perek 32 pasuk 32: ‘We shall cross over as Chalutzim before the Lord to the land of Canaan, and then we shall have the possession of our inheritance on this side of the Jordan.’ In the beginning of the 20th century, in the process of the establishment of the State of Israel, groups of Jewish pioneers came to settle the deserted land of Israel that was difficult to inhabit and made it a suitable refuge for Jews that came during a time in Jewish history. These people were also called “Chalutzim”. Kollel Torah MiTzion Montreal, Yeshivat HaKotel and Hebrew Academy see the need to create a modern type of “Chalutzim” that will lead their fellow Jewish friends in facing the challenges that modern times bring to Jewish faith.”

Participation in the program demands a serious time commitment: students must learn at Kollel Torah MiTzion two evenings weekly and participate in various leadership activities and exercises. Topics of study include select subjects in Torah She’Be’al Peh such as The Gemara`s analysis of a Mishna; Understanding a Machloket between Rashi and Tosfot;  The Chiyuv of the Mitzva of Tzitzit and  Electricity on Shabbat. Students also hone their leadership skills through activities including hiking, paintball, city navigation and guiding a flock of sheep.

“I have been so impressed with the dedication of the students – learning in the evenings twice a week, on top of their full school and extra-curricular schedules,” said KTM Executive Director Chaviva Lifson. “The learning portion of the program that was put together by Yeshivat HaKotel and Rav Herman, along with the tremendous help of Rav Ari Cutler of Yeshivat HaKotel, JNF and JNF Israel in planning the Israel portion of our program has been a great experience of multiple organizations working in unison. All with the support of Hebrew Academy in helping us build leadership in their students.”

The trip to Israel includes a three-day stay at Yeshivat HaKotel where the students will learn with the yeshiva’s Rabbaeim and tour Jerusalem and its surroundings.  The group will then move on to Southern Israel, as the students follow in “the footsteps of the Tanach”.

“So far the program is very successful and we hope that it will enable the students to connect better to their Jewish friends and influence them positively,” said Rabbi Herman.

Chalutzim is a pilot project and KTM hopes to create a similar program for young women in the future.