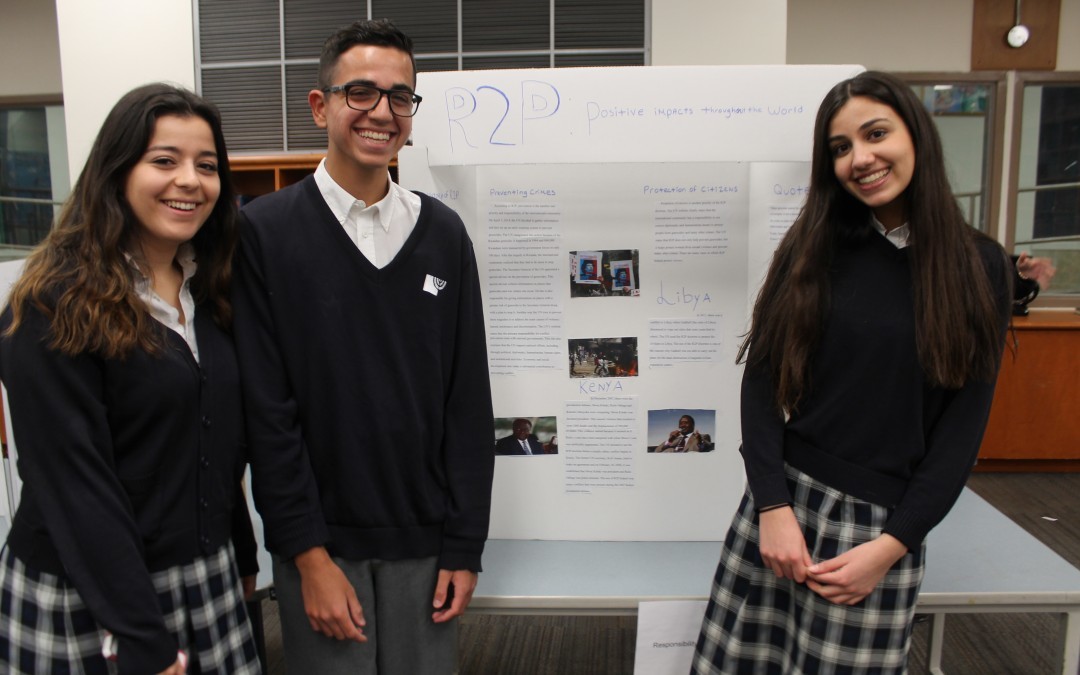 In a Hebrew Academy first that will hopefully become an annual event, Grade 11 hosted an impressive vernissage on Tuesday night that highlighted the breadth of their knowledge and understanding of modern social issues and relationships. The expo was an initiative of Contemporary World Teacher Mrs. Jackie Douek as part of her class’ study of such topics as humanitarian intervention, international human rights law and the Responsibility to Protect principle, which underscores states’ and the broader community’s obligation to protect populations from mass atrocities like genocides and mass killings.

Parents, faculty and staff remarked on the caliber of students’ posters and delivery of their elevator pitches – three-minute persuasive arguments summarizing students’ positions on issues ranging from the role of peacekeepers, to the reliability of social media during times of war, to the implications of Russian involvement in the Middle East for Israel and the U.S.

Among the evening’s highlights was an address by Hebrew Academy alumnus Brandon Silver ’11, who is the Director of Projects at the Raoul Wallenberg Centre for Human Rights.  Working under the mentorship of founder and chair The Honourable Irwin Cotler, Brandon oversees the Centre’s projects and initiatives in pursuit of international justice. In 2016, the World Economic Forum recognized Brandon as a “Global Shaper.”  A graduate of the University of Ottawa Faculty of Law, he  is currently pursuing an LLM at UC Berkeley.

As it happens, Tuesday’s vernissage coincided with Raoul Wallenberg Commemorative Day, which underscored the relevance and timeliness of both the exhibition and Brandon’s message. Following is a copy of his speech:

Thank you. It is a pleasure and a privilege to be back at HA. I am especially grateful to be participating at the invitation of Jackie, and in the presence of Joanne and Dr. Segall, where as a student I benefited from their guidance. Professor Cotler regrets that he cannot be here today as he is currently in Israel, but he is delighted about your important vernissage and that the Wallenberg Centre for Human Rights can participate in it.

It is fitting that we meet today on the evening of Raoul Wallenberg Commemorative Day.

A paradigm of moral courage and effective action, this non-Jewish Swedish diplomat rescued some 100,000 Jews in the span of six months during World War Two, singlehandedly saving more lives than did almost any government. His heroism embodies the Talmudic idiom that “if you save a single life, it is as if you have saved an entire universe.”

Indeed, the actions of Wallenberg can be seen as a forerunner of the principles that are the subject of your vernissage, such as the Responsibility to Protect, humanitarian intervention, and international human rights law.

So I want to set out a few of the examples and the lessons to be learned:

First, in his distribution of “Schutzpasses” – diplomatic passports conferring immunity on their holders – and in the establishment of safe houses conferring diplomatic sanctuary on their inhabitants. Raoul Wallenberg is credited with saving tens of thousands of lives by these means alone.

Through this singular protection of civilians amid the horrors of the Holocaust, he manifested the best of what we today call international humanitarian law.

Third, In saving Jews from certain death, deportation and atrocity, he symbolized what today we would call the Responsibility to Protect doctrine.

Wallenberg’s last rescue was perhaps his most memorable. As the Nazis were advancing on Budapest and threatening to blow up the ghetto and liquidate the remaining Jews there, he had the Nazi generals put on notice that they would be held accountable and brought to justice for their war crimes and crimes against humanity.

As a result, the Nazi generals desisted from their assault and countless lives were saved. In so warning the Nazis that they would be held responsible for their war crimes, Wallenberg presaged the principles that serve as a cornerstone of modern international criminal law.

Indeed, Wallenberg’s heroism embodies and symbolizes universal lessons, with their contemporary international resonance and importance for our time:

Indeed, state incitement to hate and genocide is a warning sign of upcoming atrocity. The Holocaust did not start in the gas chambers – it started with the demonization and incitement against Jews.

In the context of the Rwandan genocide, in the Mugesera case our own Supreme Court here in Canada ruled similarly.  Mr. Mugesera had gone on Rwandan radio to call the Tutsis cockroaches and urged for them to be killed, but then immigrated to Canada before the start of the killings themselves. He argued in court that he wasn’t there, so how could he have participated in the killings or be held responsible? The Court ruled that his incitement was as integral to the genocide as the killings themselves.

We must always be incredibly vigilant, and act at the first sign of incitement, before it could progress any further. This is also enshrined in international law, under the Convention on Genocide. It stipulates that a state engaged in incitement can be brought by any country before the International Court of Justice – regardless if they were the subject of the incitement – demonstrating our collective responsibility for one another. Indeed, this is why Professor Cotler so actively urged Canada, the U.S. and other leaders of the community of democracies to take Iran to Court for its incitement against Israel and the Jews.

Now to continue the lessons of Wallenberg, another one is

Other lessons of Wallenberg include:

Yet, despite his exemplary actions, Wallenberg was not treated as a liberator by the invading Soviets. Arrested and disappeared into the Gulag – a man who saved so many, but was not saved by so many who could – Wallenberg’s legacy also highlights the need to stand up in defence of political prisoners.

Anchored in the lessons of this disappeared hero of humanity – whom the UN called “the greatest humanitarian of the 20th Century” – the Raoul Wallenberg Centre for Human Rights spearheaded the founding in Parliament of a coalition for human rights that bears his name, bringing together leading members of Parliament from all political parties to work together in common cause.

The Coalition is engaged in the honouring and implementation of Raoul Wallenberg’s humanitarian legacy through the advocacy of global human rights initiatives, including the promotion of democracy, human rights, and international justice, and the combating of the culture of impunity; the combating of racism, hate, anti-Semitism and terrorism; universal lessons for the preventing and combating of mass atrocity; and defending of political prisoners whose freedom can transform history.

Members of the coalition will also support the annual Iran Accountability Week, which seeks to stand in solidarity with the Iranian people as it exposes and unmasks the massive domestic repression and criminalization of freedom of religion, speech, press and assembly.

Other human rights initiatives include the promotion of the Magnitsky Global Justice and Accountability legislation – which seeks to give Canada the tools to take action through a variety of sanctions against foreign officials involved in human rights abuses.

The Centre and coalition also spearheaded an international justice campaign seeking to combat impunity in the UN human rights system – hosting the families of political prisoners, dissidents, and leading human rights campaigners to challenge the election of major violators seeking a seat on the Human Rights Council, including countries like Saudi Arabia – a situation that is as alarming as it is absurd. In this campaign we worked alongside NGOs such as UN Watch, led by Hillel Neuer, whose mother Shoshana you all know as a teacher here at HA.

Ultimately, all of our human rights initiatives are inspired by Raoul Wallenberg’s humanitarian legacy.

Indeed, today we pay tribute to the singular heroism of Canada’s first honourary citizen, someone who demonstrates that one person with the compassion to care and the courage to act can confront evil, prevail, and transform history.

As the Rambam says: we must look at the world as being half good and half evil, so that the actions of just one person can tip the scales and transform the world.

So, inspired by the work you undertook in your projects at this vernissage, may this Raoul Wallenberg Day not only be an act of remembrance – but a remembrance to always act.

Kol Hakavod to Mrs. Douek, our students and our alumnus, for this most enriching evening!