Parashat Yitro: Leaning on others 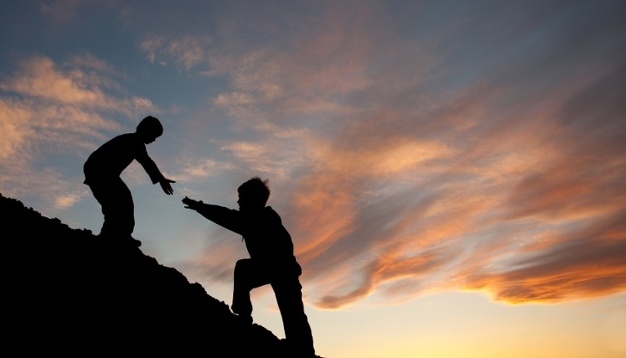 In 1972 Bill Withers wrote the iconic song “Lean on Me”. If you are over a certain age, you are already humming the tune even if you cannot recall all the lyrics. If you don’t know it — it’s a great song! That said, it is easier said than done. From birth, we are encouraged to demonstrate how well we do things “all by ourselves”. From the first time a baby rolls over to their first time driving the car solo, we spend our most formative years honing our independence. We want to be seen as strong, capable, and resilient. We are intelligent; we have learned to do all these wonderful things on our own. Our parents, our teachers, everyone around us encourage this independence which we celebrate with pride. There comes a time, however, in all our lives, where we do need to lean on someone. Are we surprised that it is so hard to do?

Parashat Yitro begins with the story of Moshe’s father-in-law, Yitro, and his reaction to the miracle of the Exodus. Yitro chooses to join the people, and clearly spends much time observing his son-in-law. On one particular occasion, watching Moshe sit from morning to evening, alone, judging case after case, Yitro speaks up: “And the father-in-law of Moshe said to him, ‘The thing you do is not good. You will surely become worn out — you as well as this people that is with you… Now listen to my voice. I will advise you and may G-d be with you.” (Shemot 18:17-19)

“Navol tivol”, you will wilt away (Shemot 18:18), Yitro tells him. You will exhaust yourself and the people will suffer more. Not only that, while you are sitting to judge alone, Yitro explains, “It is a burden on the people as well making them wait for another to be judged”. According to Rabbi Bechaye, Moshe replies that aside from judgements, many people come to him for prayers, for healing. Yitro answers: “Pray for the Jews, teach them Torah — but you cannot judge them all by yourself. You must choose other wise men from among the Jews to sit as judges.” Moshe accepts Yitro’s advice and institutes, with G-d’s blessing, the leadership and judicial system of our faith.

It is most interesting that this seemingly innocuous little statement was included in the Torah. As anyone in a position of leadership knows, criticism is part of the game. That his father-in-law, a Midian should question and even criticize Moshe Rabbenu’s approach to justice, Moshe who speaks directly to G-d, Moshe whom no one greater ever lived before or since, is unthinkable. The gall, the chutzpah, the nerve! Yet his comment led to the creation of what has become the standard of the entire judicial system of Klal Yisrael. Why did Moshe need to hear it from Yitro? Could he not figure it out on his own? Why would he insist to go at it alone?

Rabbi Avigdor Miller suggests that Moshe’s reluctance stemmed from a concern that others appointed to judge cases would do so from a point of view of human logic rather than Torah logic. The need for a shift in reference frame would present its own challenge and so it would be easier for Moshe to judge the cases alone, for now, until there would be more time to teach the elders. He also proposes that Moshe’s hope may have been for the people to eventually govern themselves, to be Mamlechet kohanim, a nation of priests, as their inborn nobility would dictate. To this, he explains, Yitro was able to make Moshe understand that the people were not yet ready to take this on for themselves, in a vacuum, without supervision or encouragement.

Would Moshe, a compassionate leader, not have been sensitive to the feelings of the people forced to wait for so long for his attention? Was he blind to what was going on? Or did he think that he was the only one who could do it?

Recall that Moshe was and remains the model of true humility, therefore it cannot be ego. Surprisingly the Lubavitcher Rebbe suggests that the reason that Moshe did not consider delegating his work was that what he was doing was not wrong. When he spoke to the people individually, he was able to help them transcend their problems as a vehicle of the Divine voice. This was a phenomenon unique to Moshe, one that no other could replicate, a gift that was uniquely his to share. In this context, Yitro would not be denying the uniqueness of Moshe’s abilities and gifts, but points out that there may be a better way. Yitro wanted Moshe to understand that he would not be able to transform them all into angels. The people needed to learn how to live in the here and now, down on Earth (Likkutei Sichot vol 16).

There clearly are so many lessons for us to glean from this short passage in the areas of giving and accepting criticism and leadership, on learning from everyone and hearing the words of others. Commentaries and essays abound on the topic for those who are curious. One most important lesson is that of “not going at it alone”. Psychologists, authors, motivational speakers have been touting the importance of resilience in ourselves and in our children, making us feel that we need to just bounce back, snap out of it, be resilient. At the end of the day, however, the best way to do so is to not go at it alone. Reach out for help, seek advice, lean on a friend. We are part of an incredible community of rabbis, educators, parents, students, friends, families, and professionals of all kinds. “I can do it all by myself” is no longer a badge of honor. Though hopefully, one day we may reach Moshe’s vision of being so spiritual that our problems should no longer be problems, in the meantime, we can learn the important lesson he taught us by example: sometimes, there is a better way.