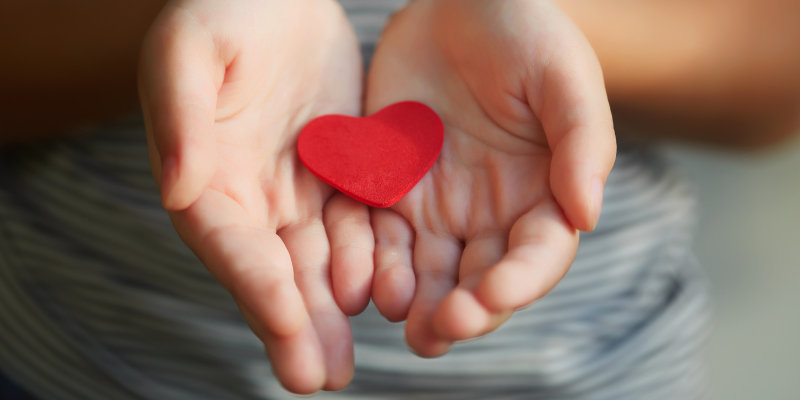 There are moments in our lives we see clearly in our mind’s eye as though they just happened. One such moment was the time my husband and I, newly married, offered to take our friends’ children, all four of them, downtown for a movie. After the show, we gave each child some coins to play the arcade games outside of the theater and let them keep what was left when it was time to leave. On our way back to the car we passed a panhandler, clearly down on his luck. The youngest child, about 5 years old at the time, tugged on my hand calling out loudly, as only a child can, “Look at that man!” So, in the trained motion of most adults walking with loud children, I tugged on his hand to move him along to the car. Nothing doing. He was determined to pull me back to the man seated on the busy sidewalk. He then pulled out the remaining coins from his pockets, grabbed his brother’s change for good measure, and gave them to the man. “He needs them more than me”, he stated, and turned back in the direction of the car without a backward glance. Though this little boy is now in his twenties and likely does not recall the incident, the purity and selflessness of this act has stayed with me all these years.

In parashat Vayetzei, Jacob leaves Canaan to make his way to his uncle Lavan in Haran. On the way, he lays down to rest, protecting himself with stones, and has the famous dream of the angels ascending and descending a ladder that reaches up to the heavens. Upon awaking, Jacob realizes that the spot where he spent the night is a holy place and vows the following “If You will be with me….watch over me.. provide me food to eat and clothes to wear….return me to peace…and be my G-d….this stone which I have set up as a pillar shall become a House of G-d and whatever you give me, I shall repeatedly tithe to You” (Bereshit 28:20-22). Could Jacob, Father of the nation of Israel, actually be bargaining with G-d? Furthermore, how can he be promising to build the Beit Hamikdash, the House of G-d, as part of a bargain?

Rashi explains that Jacob’s words are in effect words of humility. He is telling G-d that though He has promised to care for him, protect him and make him into a great nation, he hopes to remain worthy of this great gift, and that he will do all that is in his power to raise children who will eventually build the Beit Hamikdash. For his part, he promises to tithe his possessions. In his humility, he recognizes that all that he has and all that he will have is a gift from G-d, a gift for which he is expressing his hope to be worthy of.

The mitzvah of maaser, of tithing, referred, at one time, to the tithing of the farmer’s produce to support the Leviim who, engaged in Holy service, could not pursue worldly activities. Later, tithing referred to the offerings from one’s herd to be brought to Jerusalem and, more recently, to the tithing of one’s money to charity. In Masechet Taanit we learn that tithing one’s possessions comes with a guarantee of wealth. Jacob had complete faith in G-d that he would benefit from this promised reward and thus merit that his descendants should build the House of G-d. Rabbi Aaron Tendler, in a recent dvar Torah on this parasha states that tithing is the introduction of G-d into society. As Jacob leaves the Holy Land, he is promising that his personal behaviour will always reflect his belief in G-d, and this, through the act of tithing.

In Judaism, the number 10 is synonymous with holiness: ten men for a minyan to daven Kedusha or Kadish, the chamber of the Holy Ark was 10 cubits by 10 cubits, and there are 10 commandments, are just a few examples. Giving one tenth suggests a level of holiness associated with the act of giving. Rabbi Moshe Feinstein claims that Jacob would merit building “G-d’s house” because he engaged in G-d’s ways, meaning in gemilut chassadim, in giving kindness. Jacob was a role model of “kindly engagement and concern for others”. Tithing is therefore an act of kindness, the act of giving one tenth of one’s possessions to those on the margin of society. Though all mitzvot are considered equal, many have argued the primacy of some over others. For Rabbi Feinstein, how one behaves towards others demonstrates our concern for G-d-ly matters. Additionally, he points out that the Hebrew wording of the passage “aser maaser”, the double reference to tithing, implies that one may give up to two tenths or 20% to charity. The second tenth should be 10%, says Rabbi Feinstein, should be 10% of our time to be dedicated to others (Igrot Moshe, Even HaEzer).

We spend years teaching our children that “sharing is caring” and to “be nice” and for some reason, we pause in amazement when they actually follow through. Chesed, tzedaka and gemilut chassadim are at the heart of our faith. They require feeling gratitude for all that G-d has provided us with and sharing it outward with complete faith that G-d will continue to provide. It is about recognizing that all we have is a gift and sharing that gift with others. It is being true Bnei Israel, sons and daughters of Jacob (Israel), our forefather, and embodying his kindness towards others. Would that we all reach the level of purity of a child who instinctively recognizes that “he needs it more than me”.