Parashat Tetzaveh – The ability to sanctify the mundane 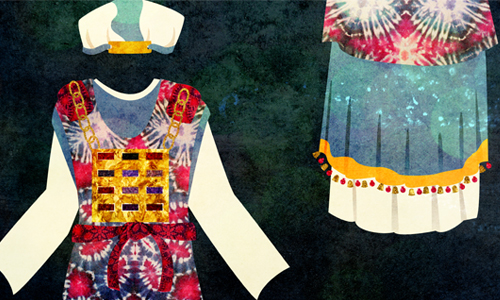 The act of smiling requires a minimum of ten muscles, apparently much less than are required to frown. Furthermore, when you smile, these muscle contractions stimulate the nervous system to release neurotransmitters and endorphins that help fight stress, relieve pain and act as antidepressants. And the effects are not just limited to the person smiling. Studies have shown that when we see someone smiling, the reward center in our brains is activated, inducing a general feeling of well-being. As humans, we are sensitive, even at a biological level, to the visual cues all around us. We also have the power to control these cues and thus impact our emotions and those of the people around us. We are constantly delivering silent messages through our appearance, our expressions and even our clothing. And we can trace our understanding of the impact that these have all the way back to Parashat Tetzaveh which offers an elaborate description of the “sacred vestments” of the Kohen Gadol. “You shall make vestments of sanctity for Aaron your brother, for glory and splendor” (Shemot 28:2).

Rabbi Jonathan Sacks, z”l, points out how seemingly contrary such an extensive description of clothing is to Jewish ideology. Indeed, most of the focus of Judaism is on spirituality, the soul, and prayer. When we say the Shema, he writes, we close our eyes to reach out to Hashem and focus on the “world of sound: of words, communication and meaning”.

Up until this week’s parasha, clothing is linked only to guilt and betrayal: in the Garden of Eden, to cover Adam and Chava’s nakedness and shame, Yaacov’s deception of his father to take his brother’s blessing, Tamar’s deceit of Yehudah, Yosef’s cloak when he was betrayed by his brothers, and again when he was betrayed by Potiphar’s wife. Here, for the first time, clothing is given a positive attribute. Thus, the clothing of the Kohen Gadol is described as “splendid and glorious”. As Rabbi Sacks z”l states, “…human spirituality is about emotions not just intellect; the heart, not just the mind.” The aesthetics of this “uniform” are a visual way to inspire awe.

The Rambam agrees, noting the importance of distinguishing the Kohanim from the rest of the population, to give them great honor, as a means to raise the “estimation of the Temple” (The Guide for the Perplexed). As he writes, “The soul needs to rest and to do what relaxes the senses, such as looking at beautiful decorations and objects, so that weariness be removed from it” (The Guide for the Perplexed).

The Or Hachaim suggests that the garments were not to display the “glory and splendor” of Aaron, but the “glory and splendor” of Hashem, since the Kohen Gadol is Hashem’s appointed ambassador in this world. The Or Hachaim continues that to explain that there were a total of eight garments: four of white linen, reflecting Hashem’s tiferet, splendor, and four with gold, representing the glory, kavod. While one may be impressed by a ruler or king in full regalia, impressive to a degree commensurate with his station, it does not necessarily imply splendor; a tyrant may inspire honor and respect, but we would not likely describe such an individual as “splendid”. While “glory” inspires a fear-based honor, “splendid” is a reaction centered in love.

Interestingly, and naturally by no coincidence, in a non-leap year, this parasha is read around the time of Purim. In Megilat Esther, we find a similar theme. In the very first chapter we read “when he [Achashverosh] displayed riches of his glorious kingdom and the honor of his splendorous majesty for many days” (Esther 1:4). The party was meant to display the king’s power though a display of his riches but also to show the people his majesty and splendor. The word “splendid” occurs once again when Achashverosh asks Haman “what shall be done for the man whom the king desires to render splendid?” (Esther 6). Haman believed this surely was in reference to him. Yet, even though he already possessed the royal signet, representing the king’s power, he was seeking something that would reveal his power to the people and demonstrate that its conformity to the king’s ideals and policies, and therefore suggested that such a person should also wear the kings royal garbs in public.

Haman seemingly understood that having power alone was not enough to gain the respect and honor he desired. He needed Achashverosh’s splendor as well. Yet, as the story goes, it is Mordechai who eventually dons the king’s regalia to parade before the populace. Even though Mordechai possessed no power in the kingdom extending over 127 nations, his power came from Divine Splendor, from within. The king’s cloak provided an “earthly manifestation” of this power for all to see.

Our bodies represent the physical, the mundane, but we have the ability to elevate ourselves and sanctify the mundane. According to the Talmud, each of the items of the Kohen Gadol’s vestments served to atone for sins such as arrogance, miscarriage of justice, gossip, and immorality. The end result thus elevating the ordinary man to a level of “splendor and glory” worthy of serving in the Temple. It should be noted that Moshe Rabbenu served in the Mishkan wearing nothing but a seamless white robe. His very essence was holy and required no clothing to demark him as a servant of Hashem. It was not a duty for Moshe as with the Kohen Gadol, it was the essence of his being.

The Kohen Gadol had an awesome responsibility requiring intense focus and devotion. Donning the beautiful vestments to “look the part” would ensure that his heart and mind were focused. In elevating himself with the priestly regalia, his heart would surely follow, bringing him closer to a state such as Moshe’s whereby he can serve as an emissary of Hashem. Nonetheless, “when the garments are removed, he would revert back to a private individual once again” (Rav Kook).

While the clothes we wear and the uniform we don can indeed impact those around us, they can also impact our own behaviour and temperament (Sefer Hachinuch). Similarly, while feelings can motivate action, action can also affect how we feel. As Rabbi Sacks z”l reminds us, the notion of Hiddur Mitzvah, bringing beauty to a command, can be retraced to the Mishkan. In beautifying an act, we elevate it. And beauty impacts the soul. Taking the steps to enhance the command changes how we feel about it. And so, even if we feel uninspired, forcing ourselves to show up and take action, dressing the part will, in the end, nurture and develop strong emotions. Eventually, the heart will follow.

Purim this year is not how any of us would have wanted. We had hoped, by now, that after almost a year, we would be done with the pandemic and celebrating all together with singing and dancing, with carnivals and parties. We have the power to shift those feelings, to dress up, to be present, to prepare a beautiful seudah for our families and enter Shabbat with joy in our hearts and a smile that will radiate the beauty within us all.