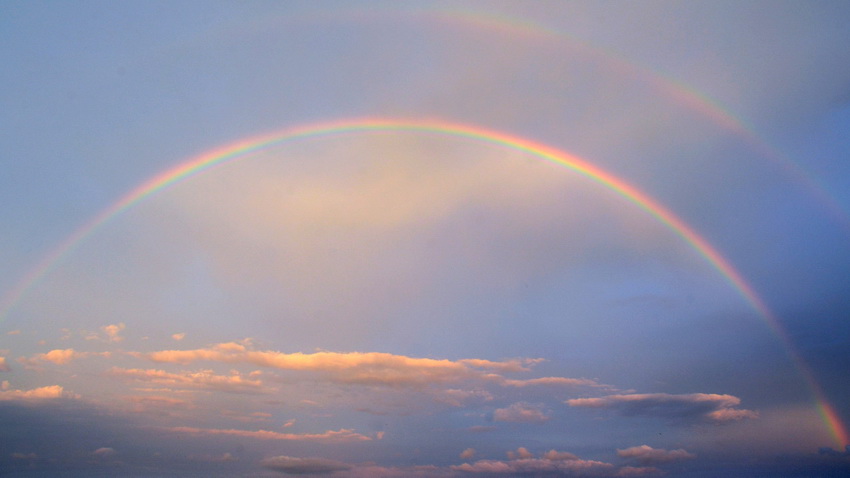 The rainbow is a meteorological phenomenon that has inspired art, literature and song and has become a universal symbol of hope and unity. From a young age, children learn to draw the rainbow with the proper ROYGBIV colors. They learn, in science class, that the rainbow is caused by water droplets acting as prisms breaking white light up into its different wavelengths, generating the beautiful colors that can be seen in the sky following a heavy rainfall. The truth is that the rainbow is actually a continuous band of colors, across the visual spectrum. Our perception of the distinct colors is a consequence of our visual limitations. Interestingly, though philosophers and scientists since the time of Aristotle have attempted to understand the phenomenon, it was not until Sir Isaac Newton in the 17th century, that a scientific basis for the rainbow was articulated. However, the field of atmospheric optics is still quite active even today, in the 21st century. What is it about the rainbow, which in essence is nothing more than an optical illusion created under very specific circumstances, that has captured the hearts and imagination of so many?

The Torah teaches that the first rainbow to appear to man occurred after the flood in parashat Noach. Noach lived in a time when mankind had descended to rampant immorality and violence. Hashem tells Noach to build an ark for him, his family, and the animals, so that they can be saved when He destroys the generation. Following the flood, Hashem promises not to destroy the earth again. “When the rainbow shall be in the cloud, I shall remember My covenant (…) Never again shall the waters become a flood to destroy all flesh.” (Bereshit 9:8-15). Though the rainbow is thus a reminder of Hashem’s covenant, it is also a sign that man is in moral decline.

There are many questions surrounding the appearance and the meaning of the rainbow. First and foremost, the story almost begs the question, how can it be that there had never been a rainbow prior to this parasha? Ramban suggests that the rainbow did exist before the flood, but that it was imbued with a new significance following the flood. The Ibn Izra and Abrabanel posit that the appearance of the rainbow after the flood is a consequence of changes in the physical conditions of the earth such that it was only now visible to man. The Kli Yakar, however, holds that the rainbow was always visible, but in righteous generations, where there is less sin and corruption, people do not look for a rainbow as they do not have concerns that would cause them to seek it. In fact, according to the midrash, several generations of righteous men never gazed upon this phenomenon, and they are the generation of King Chizkiyahu, the Men of the Great Assembly, the generation of Rabbi Shimon Bar Yochai and the generation of Rabbi Yehoshua ben Levi (Bereshit Rabba35:2). But it is not all gloom and doom to see a rainbow. The prophet Yechezkel, for example, heard the voice of Hashem speaking to him in a vision “like a rainbow in the clouds on a rainy day” (Yechezkel 1:28).

The appearance of the rainbow is also an important turning point in the world. Prior to the flood, man lived for hundreds of years and enjoyed a long life, good health and prosperity. Following the flood, the lifespan decreased drastically. However, there was also a drastic change in Hashem’s manner of dealing with man’s corruption. Prior to the flood, the punishment for corruption was total destruction, as Hashem tells Noach: “the end of all flesh is come before Me, for the earth is filled with violence through them; behold, I shall destroy them and the earth.” (Bereshit 6:13)

Yet after the flood, Hashem vows “I will not again curse the earth because of man….neither will I again smite everything living, as I have done.” (Bereshit 8:21) And as a symbol of this promise, Hashem produces the first rainbow.

Rav Kook suggests that the rainbow represents a “paradigm shift” in our spiritual development. The rainbow is Hashem’s light penetrating the physical world. In giving Noach the seven Noachide laws, man was given the first moral code to bridge the divide between the physical and the divine. It is only after the flood that Hashem granted man the potential to influence His will and to take responsibility for his own actions.

Rav Soleveitchik reminds us that though Noach was a righteous man, he was “righteous in his time”, as compared to those of his generation. He passively did his own thing, but did not pray for his generation, a generation he knew was about to be destroyed; he did not influence those around him nor did he see the potential in them to ask for their salvation. Not even once in the 120 years it took to build the ark! This is in sharp contrast to Avraham Aninu who prayed to Hashem for the people of Sodom. “[He] revealed the rainbow to Noach as an object lesson; within every dark cloud there is a possibility of seeing a rainbow full of color. “Rabbi Yissocher Frand shares that the rainbow was to teach Noach “to never give up on people. No one is beyond redemption. Every single neshama is pure at its base. ….. As a result of that, there is hope for seeing the light of the rainbow at the end of a period of darkness.

Today, in the era of coronavirus pandemic, the rainbow has become a beacon of hope for all. David Hamelech asks “Who is the man who desires life, who loves days? It is he who strives to always see the good”. Let us all take a page from his book and take a step back from the spiraling stress and anxiety and seek to find the good, to see the best in others, and to remember the lesson behind the rainbow. At the end of the day “ça va bien aller!”