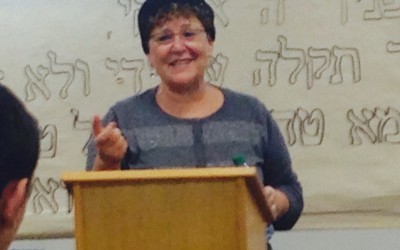 Hebrew Academy Grade 11 students were  treated to an inspiring  talk from a surprise visitor from Israel on Thursday.  Miriam Peretz, mother of two sons killed in the IDF on separate occasions, addressed the captivated audience in the Sephardi Beit Midrash. In late 1998, her son Uriel was killed in Lebanon. A second son, Eliraz, was killed in 2010 near the Gaza border. The loss of two children thrust Mrs. Peretz  into the national spotlight and she  has made her mission in life to strengthen the Jewish and Israeli spirit in the nation of Israel. Mrs. Peretz meets with soldiers, youth and bereaved families and conveys messages of hope and faith in the power of man to grow from crises.