It takes a village to raise a mensch 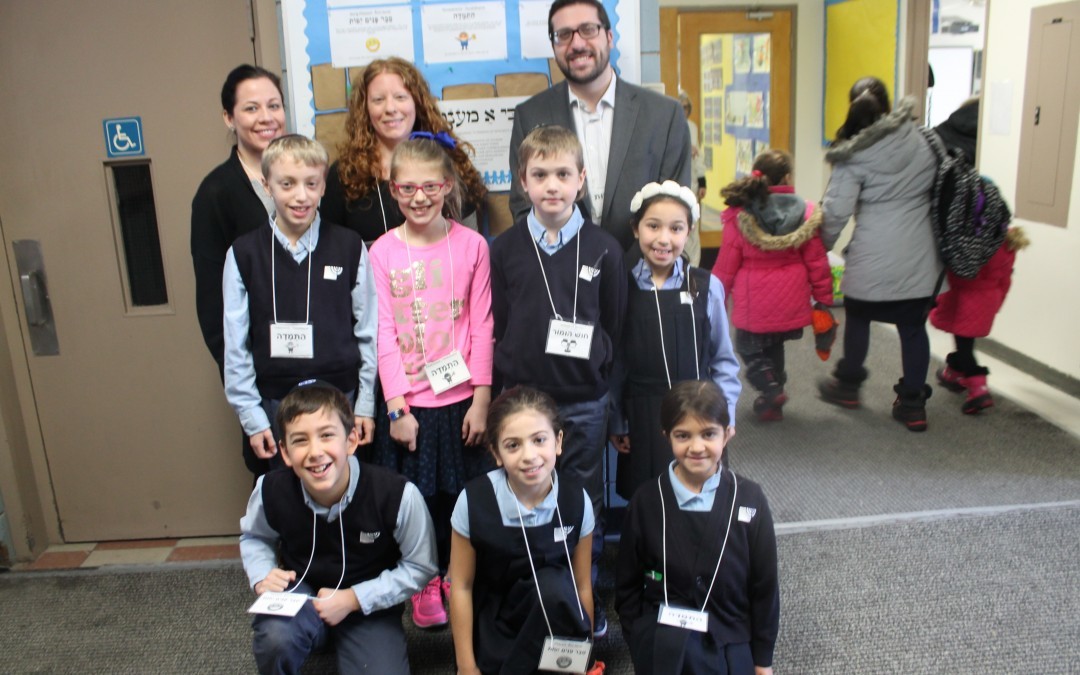 Mensch. It’s a small word with huge implications.  The universal term for “all -around good guy” is an honorific that most aspire to receive. Few compliments resonate more with (Jewish) parents than hearing that others view their child as a mensch. Thanks to an innovative, trilingual, school-wide program that celebrates character strengths and virtues, hundreds of Hebrew Academy Elementary students, parents and educators have been standing a little taller in recent weeks.

Led by School Counsellor Jillian Rudnitsky and Rabbi Educator Rabbi Eddie Shostak, the Be a Mensch Project encourages participants to recognize positive values in their peers and take pride in their own Middot Tovot via the awarding of special cards that are sported as badges of honour.

“The energy shift that is felt when someone acknowledges a positive value in someone else is incredible and it helps strengthen relationships,” said Rudnitsky. “Ultimately, if we want our classrooms, grades, teaching teams, and entire school to feel like positive communities, we have to take more time throughout our day to make sure that every member knows that they are valued.”

Be a Mensch centers on nine values – Bravery, Curiosity, Compassion, Teamwork, Perseverance, Creativity, Humour, Gratitude and Being Pleasant – each of which is printed on a card with an accompanying definition. One who exemplifies Bravery, for example, “show[s] courage by not shrinking from threat, challenge, difficulty, or pain. You speak up for what is right even if there is opposition. You act on what you believe in.”

“A key component of the program is to teach students the Jewish roots of these universal values and that good behaviour is a Jewish religious value,” said Rabbi Shostak, who ascribed Torah-based verses to each trait and chose an expression from Pirkei Avot (Ethics of the Fathers) to accompany Bravery (Who is strong? He who conquers his evil inclination).

“Our hope is that by involving all the students, faculty and staff, the children will recognize that being a mensch is not limited to a select group.  Rather, these are universal values rooted in Torah that span across age, gender, and people,” said Rabbi Shostak.

In the first of the three-week program, faculty and administrators generated enthusiasm for the project by sporting badge holders around their necks and exchanging values cards. Rudnitsky and Rabbi Shostak visited all classes to introduce Be a Mensch and affixed posters around the school. The following week, all students were given badge holders, and participants continued to wear them for the program’s duration. Teachers integrated the values within their lessons, and the library even circulated values-themed books.

Rudnitsky and Rabbi Shostak stressed to all participants that Be a Mensch was not a competition. “This is not about how many cards you get by the end of the week!” they said. “There is no winner.” The coordinators also asked teachers to make sure students were not simply awarding cards to their friends, and that no child was left out.

Teamwork was among the many values cards earned by Grade 4B student Reuven Drazin. “I was playing soccer at recess and my friend saw that I was encouraging another player during the game. I said to [the player,] ‘it’s ok if you didn’t get a goal, you’ll get a goal next time.’ And he did,” said Drazin. “I also encouraged people not on my team. I liked the program. It was fun to get the cards and I was proud to get them and it felt good to give them to people who were also doing good.”

Beyond the pride participants felt upon receiving cards, Be a Mensch also brought students and staff together.  People “were also extremely curious to hear how others had earned their cards – the program allowed meaningful discussions to take place,” said Elementary School Principal Shauna Joyce. “Be a Mensch allowed all members of our school community to work together and reinforce the characteristics that were important to us.”

At the end of Be a Mensch, student buddies reflected on the traits they received via a special writing and drawing activity that they took home.  The coordinators also visited each class and discussed the imperative of being a mensch not only for the program’s duration but for the rest of their lives. In the near future students will watch a meaningful video reviewing their experience.

“I am so proud of our faculty and students who are an inspiration to us all,” said Executive Director Linda Lehrer. “They embraced the Mensch project with such excitement and enthusiasm.”

The program’s coordinators take pride in its success. “The smiles that appeared on [participants’] faces when they received a card were contagious,” said Rudnitsky. “Those smiles spilled over to the rest of their day and their pride was visible to those around them. This is what everyone deserves to feel, day in and day out. This program is the platform for that message — that it feels good to do good, and that our Middot do not go unnoticed.  We hope everyone continues to use this language and identify these amazing traits in one another long after the program is over. “