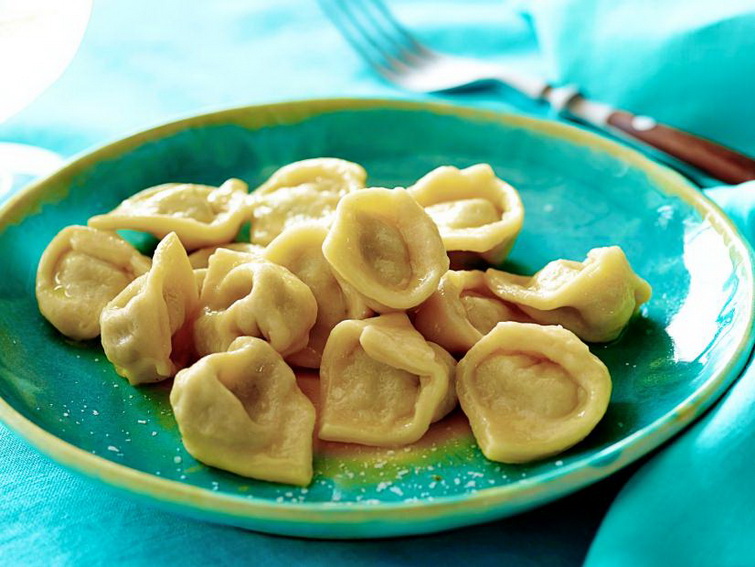 As any self-respecting Ashkenazi Jew, I have a bank of key Yiddish words and expressions that I pull out on occasions where no other word will do. One such word, learned from my mother-in-law – who, incidentally, also does not speak Yiddish – is the word: patchkerai. For those who are unfamiliar, a patchkerai is a Yiddish word for something that is very difficult to make (i.e. has a lot of ingredients or steps and takes a long time). There is no patchkerai greater than my grandmother’s kreplach recipe. These bundles of dough filled with meat or cheese can be used in a variety of ways and in many different recipes, but they must be prepared properly. The dough must be kneaded just so, the exact amount of filling must be added, they must be folded as such, boiled for exactly seven minutes, cooled individually, and, of course, prepared in batches large enough to feed the entire IDF in one sitting. I am actually the proud owner of a “kreplach maker”, which my grandmother z”l actually purchased for me for when I make my own batch, and stock in my freezer “for when company comes”. In truth, after spending no less than an entire day with my grandmother in my late teens preparing them from scratch, I only attempted to do so once more in all these years. I decided that Montreal Kosher does just as good a job –forgive me Safta! Nonetheless, every single time I eat kreplach, I remember how my grandmother would then coat them with fried bread crumbs and sprinkle sugar on top and then watch us enjoy the sweet, savory meal in satisfaction for a job well done! As her yortsayt is on Simchat Torah, I must say that it tickled me pink to read of the tradition to eat kreplach on Hoshana Rabbah.

Hoshana Rabbah, the seventh day of Sukkot, is the final day of the divine judgment that began on Rosh Hashana. It is the final Day of Atonement, the day in which our fate for the coming year is sealed: “On the seventh day of Sukkot, the judgement of the world is finalized and the edicts (pitkin) are sent forth from the King” (Zohar). We pray the hoshanas, Hosha’-na meaning “save please”, asking Hashem to please, please, please save us. As the bimah is circled seven times on this day, the desperation of the text of the prayers rises. We are not just asking for forgiveness, we are asking for salvation.

While the performance of the Hoshanas in the Beit Hamikdash is not found in the Torah, it was brought down from Moshe at Sinai. Once the Temple was destroyed, the Anshei Knesset HaGedolah instituted that we should continue the ceremony with the bimah of our congregations. And so, in shulls everywhere, on this day, the Torah scrolls are placed on the bimah and we circle them seven times, carrying the Lulav and Etrog and reciting the Hoshanas. Then, when the circles are complete, we separate the aravah, the willow branch, from the Lulav bundle, and strike the ground with it.

The “taking of the willow” on Hoshana Rabbah, is a tradition dating back to the time of the prophets, commemorating the willow ceremony that took place in the Beit Hamikdash. The source of this tradition can be traced back to the Talmud (Sukkah 44b). Large willow branches were set around the altar every day of Sukkot and the people would circle the altar. When complete, we strike the ground five times with a bundle of willows. There is some dispute as to whether the willows should be waved, according to Rashi and the Bach, or used to strike the ground, as interpreted by the Rambam and other Rishonim. Today, we circle the bimah in shull seven times with the sifrei torah while reciting the Hoshanas and then take the willow branches to strike the ground, an act for which many interpretations have been put forth.

Throughout Sukkot we pray for rain, and the amount that will fall for the year is decided on this day. Thus, the striking of the ground with the willow branch symbolizes our need for the rain to penetrate the ground. Another interpretation is that it is symbolic of surrender to G-d, or prostration on this final day of atonement. It may also symbolize the “tempering of the five measures of harshness”. While there is much discussion of the act itself of striking the ground, the choice of using the aravah, the willow branch, to perform the act has raised many questions.

The arava, is supposed to be taken from arvei nachal, the willow brook, which grows near bodies of water as it requires much water to grow. Thus, it is an appropriate implement in a prayer for rain. If we look more closely, however, the choice of the willow branch is even more beautiful. As we know, the arbah minim, the four species, are said to represent different parts of the body. The Etrog symbolizes the heart, the haddas, the eyes, the Lulav, the spine, and the aravah, the lips. While we bind them together to pray to Hashem during Sukkot with our entire being, on Hoshana Rabbah, we raise our voices, with our lips, in prayer to Hashem to bring forth our salvation.

However, if we look at other interpretations of the four species, one may wonder why the willow is reserved for such an important ceremony. In this interpretation, the four species stand in for the four types of Jews who make up Klal Israel. The Etrog is one who has Torah and mitzvot, the hadas and Lulav only have Torah or mitzvot, while the aravah has neither Torah nor mitzot (Vayikra Rabba 30:12). Yet, on Hoshana Rabbah, it is the latter that takes center stage. The willow branch thus represents the Am Ha’Aretz, the simple man. Though some have suggested, quite ominously, that beating the aravah on the ground symbolizes the afflictions such a person will endure, we would do well to remember that we have just learned, on Sukkot, that the four species are brought together in a show of unity, that our prayers are strongest when we all come together.

Though the simple one may be limited in his ability to learn Torah, his prayers have special powers. The Jew who feels separate from the rest of the people, disconnected from faith and from Torah, still has the power to approach Hashem in prayer. In separating out the willow from the rest of the species, and using it to pray on this day, we highlight the importance that person plays in the power of our prayers and thus his essential role to the whole of our people. The merit of sincere prayer is powerful, regardless of who is raising their voice to Hashem.

R. Avraham Yitzchak Ha-Kohen Kook, Rav Kook, suggests that we do not beat the willow branch, we beat with the willow branch. Though a man may not be learned, he explains, he may still have common sense and religious instinct that are important (Sukka 43b). They are “devoted to mitzvot through habit and instinct”. Beating the ground with the willow does not mean that we wish to punish the willow or the simple Jew for lacking Torah and mitzvot, it is rather to recognize that the willow is a force to be reckoned with, “a natural, healthy power that is part of the arsenal of the Jewish people”(Moadei HaRa’ayah).

This auspicious day of atonement has inspired many traditions over the years. Some communities spend the night before Hoshana Rabba engaged in Torah learning and read through Sefer Devarim where we learn of the love and fear of Hashem. Some then recite Tehilim. In many communities, the Shaliach Tzibur even wears a kittel as on Yom Kipur to mark the importance of the day.

On a lighter and sweeter note, there are communities who dip apples in honey to bring home and eat in their sukkah or who share pieces of honey cake, Lekach, for a sweet judgement and for many, it is the last day that we dip our challah in honey. There is also a custom to eat something in the sukkah at the end of the day and say, “It should be His will that we merit to sit in the sukkah of the Levithan” (Rema 667:1), the time when we will all come together as one, in true unity. And, of course, there is the tradition of the kreplach.

Though I had admittedly not heard about this one until now. The idea behind this tradition is as follows: on Holidays we are instructed to be joyous and celebrate by consuming meat and wine, a festive meal. According to Kabbalah, bread or dough provide sustenance without causing harm, while meat can only provide sustenance at a cost; that of the life of an animal. And so, on a day that we ask Hashem of salvation and atone for our sins, on this final day of atonement, we cover meat with dough and hope that Hashem has compassion in all His judgements.