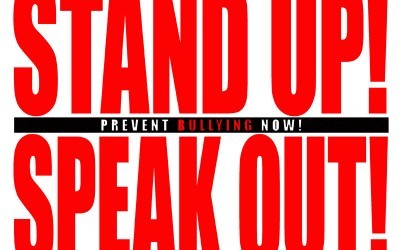 According to the  Canadian Institutes of Health Research “Canada has the 9th highest rate of bullying in the 13-years-old category on a scale of 35 countries. At least 1 in 3 adolescent students in Canada have reported being bullied recently“, and  “47% of Canadian parents report having a child victim of bullying.” These facts, together with the responsibility of all Quebec schools to educate students about  Bill 56 ( “An act to prevent and stop bullying in schools”) and record and react to incidents of bullying, served as the imperative for Hebrew Academy High School to designate November as Anti-Bullying Month.

Students were formally introduced to the campaign at an assembly in the Lieberman Family Beit Midrash this morning. Following an insightful Dvar Torah by Mashgiach Ruchani RabbyiHenoch Singer in which he highlighted a couple of incidents of bullying in the Torah, Principal Dr. Laura Segall shared various statistics on bullying with the students and elaborated upon Hebrew Academy’s anti-bullying and anti-violence plan. She encouraged students to report incidents of bullying to one of five designated High School faculty members, but emphasized the willingness of all  faculty and staff to help students in crises – including both victims of bullying and offenders.

All High School students will explore Bill 56 in all languages through writing, art and multimedia projects and will participate in an essay contest on the subject. At the end of the month, the best posters, skits and essays will be shared at an assembly and prizes will be awarded to first, second and third place winners in all languages.