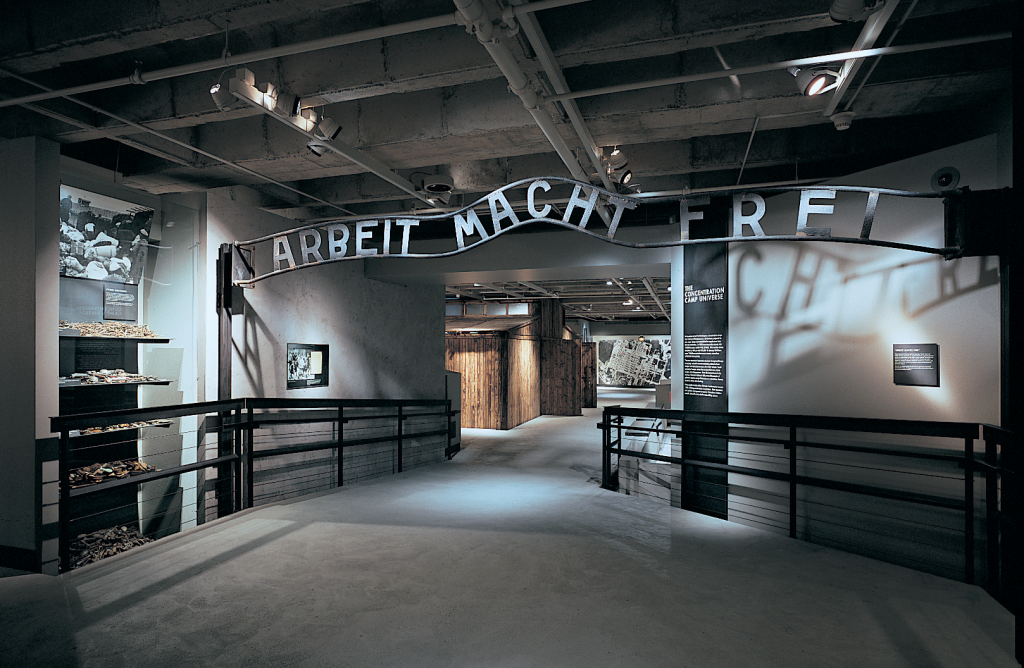 Every year during the week of Yom Hashoa, Hebrew Academy Grade 11 students spend a few days in Washington D.C. where they explore the city’s myriad museums, rich history and culture, and mark Holocaust Remembrance Day with a special assembly and visit to the United States Holocaust Memorial Museum. Following is a recap of the group’s activities yesterday – Day One – from High School Principal Dr. Laura Segall, who is chaperoning the students along with Judaic Studies Department Head and Dean of Jewish Life Rabbi Eddie Shostak and Director of Student Services Yoni Lehrer:

Our first day in Washington coincided with Yom Hashoa.  To mark the day, we visited the National Holocaust Memorial Museum.  Before heading out, Rabbi Shostak addressed the students on the significance of the day.  He also asked that they take note of their impressions throughout the day and to try to distill them into a Six-Word Memoir.

After dinner, we gathered in the conference room for a Yom Hashoa assembly.  We read Yizkor for the six million Jews who perished, read Kel Maleh Rachamim, and shared our impressions of the day. They then each lit a candle for a lost relative or for the person whose passport they carried that day. Below are those impressions, in your children’s words.  (Names are included only for the authors of the six word memoirs):

“If the world doesn’t, God does”– Nathanel Ouazana
It’s amazing how people could keep their faith in such times of despair. I know my family was not directly affected, as many of us, they were safe in Morocco, but nonetheless, we were all affected.

I always heard stories of the Holocaust.  Today, however, made it real. Seeing it all in front of me.

“Individuals can die but people can’t” – David Friedman
My family lost a lot of relatives. I feel it is my role to perpetuate the memory.

I had to walk out of the movie on antisemitism.  It is hard for me to grasp why a people could be so persecuted when all they want is to practice their beliefs. I then walked straight into more displays on antisemitism….it was very hard.  I broke down.  As Jews, we cleave to one truth and that is why we are always on top.  I was very proud to be Jewish today!

“A new democracy breaks a people”– Yoni Mydlarski
Hitler’s government made people believe they had the power. This is what they did with that power.

I was glad to see that this museum, placed in the Nation’s capital, acknowledges that the Americans failed to help.  We condemn the Nazis but truthfully, it could have happened anywhere. The world did nothing.  This underscored how badly we need our own country. We can only ensure our survival by Jews taking care of Jews.

This visit made the whole insanity a bit more tangible for me.

“They woke up to say goodbye” – Zachary Rehany.
Every day, Jews in the concentration camps woke up not knowing what the day  would bring, if they would have to say goodbye to someone.

I don’t understand how the world was able to stand by and watch. People who could have helped, didn’t. Stories like the St Louis turned away from Cuba should never have happened. Thank god we have Israel today and God to take care of us.

I was walking through the museum with a friend who said: ” OK, it’s all so sad, but in a week, everyone will forget and this will have been pointless”. As Jews we cannot just stand by.  We have to take action and show initiative.  There are still genocides going on today.  We need to take the initiative and not let what happened to us happen to others.  We cannot turn a blind eye.  It is our job to take action.

Those who died did not lose their lives for nothing. They stood for something. We have to take action and honor their memories.

It was a very painful day….so hard to believe all the shoes, the hair, even knowing the stories, it was very hard….

The most emotional part for me was walking through the train car.  I wanted to see what was inside because it was dark, so I shone a flashlight.  There were scratch marks on the walls. Such suffering….

“Many try, none succeed, we survive”-Dr. Laura Segall
I was most struck by the video clip of the people in the Displaced Persons camps where they noted a rise in weddings and births.  The  Jewish people embrace life, even with all they had just been through.  It is our principles as Jewish people that allow us to carry on and survive despite what any nation may try.

This was my first visit to a holocaust museum.  I am just amazed how people can go through such a thing and still keep their faith.

On this visit, I was most struck by the clay model of the gas chambers.  How the people were herded like cattle to their deaths.  Many were women who were sent there because they were holding a child.  One witness recounted that her mother grabbed her daughter’s baby, inventing a story, to ensure her daughter’s survival.  How could that woman go on knowing that her mother saved her by taking her child and herself to their deaths?   And the gas chamber itself….it took five minutes for people to die of asphyxiation.  All those children…..

In one witness account, a man was angry that his camp mate was praising God.  What could you possibly have to praise Him about?  He asked.  The friend replied, “ That he didn’t make me like them”, pointing to the Nazis.

I liked the fact that we could wander around and experience the museum on our own, at our own pace, and react how we wanted to.

“Ignorance is easy acknowledgement is hard”– Shai Edery
The dead and the living must bear witness. We have to remember.

My grandfather recently told me how he knew he was a Cohen…My great-grandmother was hiding with him in France when the Nazis began approaching.  As they were making their escape, they had to descend a bunch of stairs where there were already a lot of dead bodies.  His mother told him “Look away, you are a Cohen, you cannot see this.” I feel honored to have the zechut to have him in my life.

My grandmother and her uncle are from a small town in Hungary.  My great grandmother instinctively told her children they needed to hide.  No one in their town did.  When they emerged, everyone had died.  If you met them today, my grandmother and her brother, they are the sweetest, cutest, people you could ever know.  I just can’t believe how they can be like that knowing what they have been through. We need to appreciate what we have.

At the end of the tour there is a section on current genocides. The museum highlighted how the Jews help other nations as well.

I had a very hard time walking under the sign that said “Albeit macht frei”. I couldn’t get out of my mind the thought of how many people walked under that same sign but never made it back out.

“Children crying helplessly but nobody came.” Meir Hersson-Edery
There were 3 million Jews in Poland. That’s 9.5% of the population.  How could a country give up 1/10th of their population?  Maybe as Jews we need to reach out more, beyond our community? Maybe we should band together more?  I don’t know what the right answer is?

Looking at the numbers as well, each train held about 4200 people. Based on the number who would not make it by the end of the ride, at least one person standing next to you would die before your eyes.

I know the analogy is wrong, but being a bystander, it’s kind of like with bullying.  Bad, really bad things happen when people don’t speak up.

My family is from Belgium. The trains weren’t leaving and tens of thousands of people were lining up to leave the country. Over 45000 people died.  My grandfather and his family somehow found a truck driver who took them out of the country.  They met others along the way that also helped. The righteous among the nations were the light of the tunnel.

“Sheep’s blood stains the shepherds’ hands”– Isaac Ricardo
We have a responsibility to take the time to observe and study what is said to us under the guise of help but is actually politicism with negative intent.

Take the time to learn and take a stand.  Don’t be fooled.

The museum was too graphic for me.  I couldn’t watch the films; I had a hard time taking it all in.

I don’t know what to make of it, but 6 million Jews is 6 million as defined by the Nazis.  There were only about half as many halachically Jewish people who perished. Isn’t it interesting that the right of return for Jews to Israel follows the same rule as the Nazis used to identify Jews?  A person must have at least one Jewish grandparent; one for destruction, another to rebuild.

“A broken people, guardians of hope”-Rabbi Shostak
As much as we carry a baggage of “brokenness” what keeps us going is that we are the guardians of hope. Rabbi Lord Jonathan Sacks explains the difference between optimism and hope.  Optimism is saying everything will be alright.  It is passive.  Hope is that together, we will make things better.

We must teach the world hope.