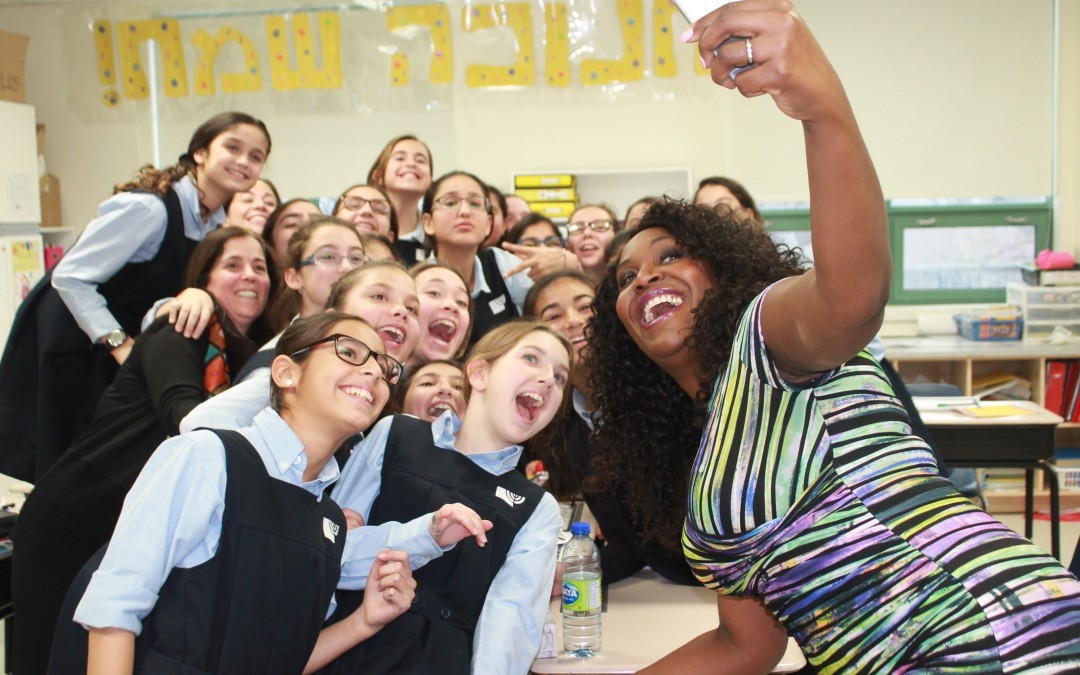 It was an exciting morning at Hebrew Academy as our Chanukah segments were featured on City TV’s Breakfast Television! Kol Hakavod to our eloquent student and faculty representatives who did a remarkable job of speaking extemporaneously and to all of our students, who represented our school so beautifully. Thank you to our dedicated faculty members who put in tremendous time and effort in planning, coordinating and rehearsing each of their parts. Kindergarten B, Grade 1B, the Grade 6 Bnot Mitzvah and Grades 7 and 11 were the lucky classes that were chosen to represent us.

Perhaps most poignant, was the beautiful pre-Chanukah ceremony coordinated by High School Director of Judaic Studies Vicky Szyf, in which pairs of Big Sisters and Brothers in Grades 7 and 11 lit one of eight candles on the Menorah, then shared what each candle represented on a personal level. As the entire ceremony could not be featured due to time constraints, following is a copy of their script, composed by Mrs. Szyf:

We light candles during the eight days of Chanukah. On the first day we light one candle and every night we add another one.

Today, we will have symbolic candle lighting, giving each candle a meaning.

We will connect its special light to the past, present and future.

We light the first candle of Chanukah in honour of the Maccabees who fought with bravery and won the battle against the Greeks at the time of the second temple. Thanks to them, we gained our sovereignty over the land of Israel.

Let us light the first candle to remember their victory.

We light the second candle to celebrate the miracle of the oil. A small amount of oil was found, which seemed enough to last for one night, miraculously lasted for eight days and nights. With that precious oil we were able to light the menorah in the holy temple and bring light to Jerusalem and the entire world.

Let us light the second candle to remember the victory of light over darkness.

We light the third candle in honour of the exceptional ladies of Chanukah. Yehudith, who aided the Maccabees during the war, and Hannah who stood up along with her seven children, proud of our religion and our tradition of not giving in to the assimilation decrees.

Let us light the third candle in honour of their spiritual heroism.

We light the fourth candle in memory of the six million Jews that were murdered during the Holocaust.

This was an exceedingly dark time in our history and in the history of the world. The famous author, Ellie Wiesel, titled his book, which describes that time of darkness: Night.

Let us light the fourth candle in order to bring back the light.

We light the fifth candle in honour of the righteous among the nations, people who listened to their inner voices and risked their lives in order to save Jews and others during the Holocaust simply because it was the right and moral thing to do.

Let us light the fifth candle in their honour and in respect to their acts of heroism.

We light the sixth candle in honour of the brave soldiers of the Israel Defense Forces who risk their lives to protect the land of Israel and the lives of our brothers and sisters there. As well, the IDF sends delegations of doctors and specialists to help in disaster settings such as in Haiti and Nepal. They work to protect and help all nations.

Let us light the sixth candle in their honour and in honour of their bravery and heroism.

We light the seventh candle in honour of the individuals who inspire us by their choice to stick to life and celebrate it in spite of the challenges and tragedies they face.

Let us light the seventh candle in honour of unity of our people and our belief in the holiness of life.

We light the last candle with a prayer.

A prayer for peace in the world.

The recent violent attacks in Paris and in other places have left people around the world scared and nervous and concerned.

Let us light the last candle with a pray for respect and tolerance amongst people of all the religions all over the world.

May these lights, along with our prayers, bring happiness and peace to the world.

The students were particularly excited to meet and interact with the delightful Catherine Verdon  Diamond – a real-life television personality, who took the time to engage with them and pose for selfies. Our thanks to City TV and Breakfast Television for the opportunity to showcase our love for Chanukah and share it with the rest of Montreal!