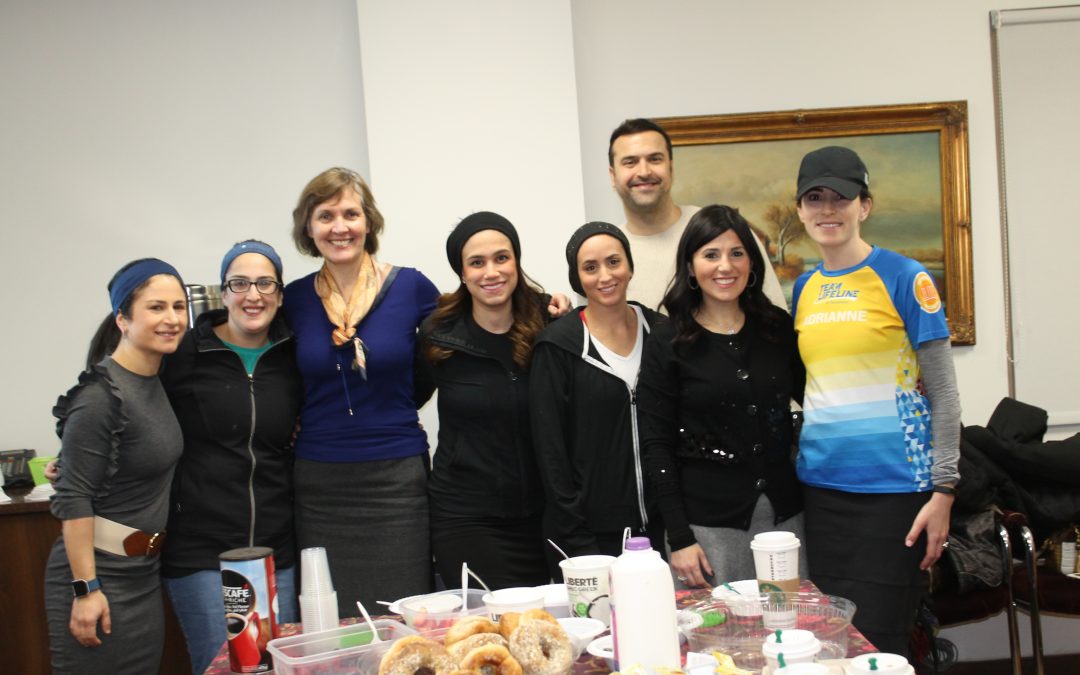 On any given night in January, when the temperature outside is minus 15 Celsius and the rest of the world is keeping warm indoors, a small number of layered-clad people may be seen  running in the bone-chilling darkness. These brave outliers are Hebrew Academy parents – and they are prepping for the Miami Half Marathon on January 28.

And nothing – not rain nor sleet nor snow nor icy pavement – can get in the way of their training. That’s because the parents are participating in the marathon on behalf of Chai Lifeline, an international organization that provides year-round emotional, social and financial support to over 4000 children and their families touched by serious illnesses – and the runners are determined to raise the organization much-needed funds.

“As a mother and an educator of children, I can only imagine the challenges faced by families of children with serious illnesses,” said Beth Moskovic, a Hebrew Academy parent and Director of Academic Support Services.   “It pains me to think of what they experience daily and it is so crucial that they receive the support of Chai Lifeline,” she said.

Moskovic was among the first Hebrew Academy parents in 2015 to participate in the Miami Half Marathon under the Team Lifeline banner. This year, her husband Ilan Dahan will run alongside her. Having had a brother who passed away from a serious illness many years ago, Moskovic personally relates to the organization and to the families it assists.

“My brother did not have the honour to receive support from Chai Lifeline, as it did not exist back then. As a proud Hebrew Academy parent and staff member, I am also running in honour of the children and families of our school who, in recent years, have had to cope with a serious illness.  Chai Lifeline has acted as a support to some of the Hebrew Academy families too.”

One such Hebrew Academy family is the Wizmans, who lost their beloved husband and father Michael earlier this year to cancer. Michael’s wife Myriam and son Ness, in Grade 8, will be running in his memory. Other dedicated HA participants include parents Adrianne Drazin, Sharon and Emmanuel Amar, Dr. Louise Pilote, Laura Ohana, Judith and Lior Azerad,  Esther Harrosch and Sarah Bensimon, who graduated HA in 2003.

“I had heard of Chai Lifeline many times but never really understood what the organization did until I watched videos and read testimonials about its work,” said Bensimon. “I decided right away – thanks to the motivation and persistence of friends – that I would raise money for these children and their families. To see what they have gone through is heartbreaking but knowing Chai Lifeline is there for them at all times is a true blessing. It is truly an honour to run the marathon and represent the school. Hebrew Academy has become family, and who better to represent when participating in such a worthy cause! With less than three weeks to go until the race, it’s time to train hard and raise as much as possible.”

For Hebrew Academy’s Executive Director Linda Lehrer, the men and women’s decision to run the marathon as Hebrew Academy representatives is a tremendous source of pride.

“The fact that our parents, graduates and students have such a strong association with our school as a paragon of Chessed means so much,” she said. “I am so proud of them, for serving as shining examples to their children, friends and fellow community members. They truly embody Hebrew Academy’s motto ‘We Live What We Learn’.”

Kol Hakavod to our HA family members who have raised over $41,000 for Chai Lifeline to date! Some of the runners have not yet reached their personal fundraising goals. To support them, please visit individual pages on the Chai Lifeline website.