Generation Me? Not these teens – their view of the world is anything but myopic 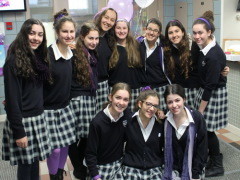 They say that Millenials have only one priority: themselves. Grade 10 students Janna Sternthal, Eliana Rohr and Elisheva Eisenberg prove there are exceptions to every rule.  Amidst schoolwork, volunteerism and extra-curricular activities, the Hebrew Academy students are helping some of Montreal’s tiniest and most vulnerable babies by spearheading a new campaign in the High School called Purple for Preemies. In exchange for a $2 donation to the Jewish General Hospital Auxiliary’s Tiny Miracle Fund, students were encouraged to accessorize their school uniforms with purple items in honour of World Prematurity Day today. Proceeds of the fundraiser will go toward the purchase of vital, life-sustaining equipment including incubators and ventilators for the JGH’s new state-of-the-art Neonatal Intensive Care Unit slated to open in January 2016.

“We heard about the campaign through Roz Hutman, one of the organizers of the fundraiser,” said 15-year-old Elisheva Eisenberg. “We realized that this was an extremely good cause however not too many people know about it. With that in mind, we decided to take action and see what we could do to support the project.”

As the mother of a premature baby born at just 24 weeks of gestation, Hebrew Academy parent Roz Hutman is indebted to the doctors and nurses at the JGH NICU for the “incredible care” her son Joshua received when he was born in 2004 weighing just 495 grams (1.09 pounds).  “Joshua became the fifth smallest baby to survive at the JGH at that time,” said Hutman.  “Being the mother of a child that was saved by this unit, I felt completely indebted and wanted to give back. Now 10 years old, Joshua is thriving and is a “happy, healthy, smart and fun-loving child.”

Hebrew Academy’s Grade 6 girls are also actively participating in the fundraiser. In addition to the toonie collection, they will be hosting a fundraising “Spa Day” for Grades 1 to 3 in the Elementary School, as part of their grade’s Bat-Mitzvah program that emphasizes the performance of chessed, acts of kindness.

The Grade 10 students took on a leadership role in spearheading the campaign in their High School because of their staunch support for the cause.  “We decided to get involved because we believe that everyone should have a chance to live their life to their full potential,” said 16-year-old Eliana Rohr. “The beginning of everyone’s life is a very fragile and important time. Premature babies are faced with many obstacles in their development; preemies should have the same fighting chance as all other newborns.”

“We think it’s extremely important to share the campaign with our peers because we are part of one community and should be there for each other,” said 15-year-old Janna Sternthal.  “A lot of people don’t know about prematurity since it isn’t such a predominant issue for people who don’t have any association with it. Only with awareness, can situations change and improve for the future. Seeing how expensive life-sustaining equipment for preemies is, we thought that as a school, it would be very beneficial to support this cause in order to make a difference.”

For more information or to donate to the Tiny Miracle Fund Project, please call the JGH Auxiliary at 514-340-8216.