Four days in Israel, a lifetime of memories 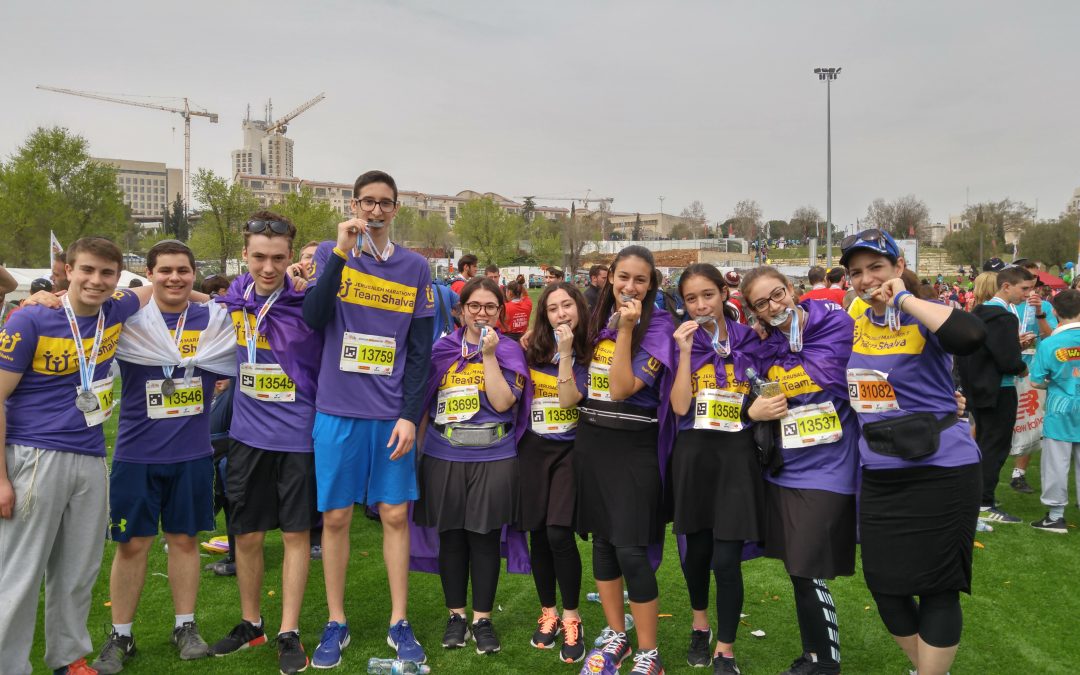 Ten of our Grade 10 students along with High School Principal Dr. Laura Segall just returned from a whirlwind weekend in Israel where they participated in the Jerusalem Marathon on behalf of Team Shalva. Our students raised a whopping $36,000 for the organization and we couldn’t be more proud (read the full story here)!

Following is a letter Dr. Segall emailed to parents and students while in Jerusalem:

Normally, when I chaperone students on a trip, I update the parents as we go along.  On this trip, this was impossible. There was not a moment when we were not actively engaged in one experience or another, each more impactful than the next. I will try to capture some of it here for you, but I am concerned that these words will not come close to the experience your children had on this whirlwind trip!

We were greeted on Thursday, exhausted but excited, by Doudou, our driver, and Deborah, a Bat Sherut, who accompanied us back to the hotel to freshen up before heading off to the New Shalva Center in Jerusalem.

Once there, our guide, Sammy, volunteer director, took us on a private tour of the complex, as the group that was to join us was late.  The center is incredible. They offer everything from dental hygienists, to aqua therapy, music therapy, schooling, after-school programs, sleep overs and “Mommy and me” programs to families with special needs children.  And they do it all for free, simply asking the families, Jewish and non-Jewish alike, “What can we do for you?”

It is a very special place, clean, bright, and filled with happy children from newborns to 21 years of age.  Graduates of the program are now receiving vocational training and a part of the program consists of teaching the students how to run a restaurant, from cooking to serving.

When we got to the day care/preschool, our students were allowed to hang out with the kids for a while. The kids, ours and theirs, had a blast!

After the tour and a light meal, we joined the others in a special program in the auditorium which is where we were treated to an incredible concert put on by students of Shalva.

Friday was race day!  The weather cooperated (it had been raining in recent days).  Ours kids proudly carried the Shalva flag and set off on the 10K run.  Yasher Koach to Shalom Zobin, who placed 987 out of 10,054 runners in the 10K category (and was 7th to cross the finish line out of all members of the Shalva Team runners).  At the finish line, our students’ pride in their accomplishment, in being in Israel, and in being part of this incredible event, was immense.

We then walked/hobbled our way over to the Victory Party at Cinema City where we were each awarded Shalva medals by one of the organizations students.  Three of our girls, Jojo Cons, Ariella Abenhaim and Leora Feld, were also recognized as top fundraisers with a certificate and a bag of goodies. We were then treated to a lovely buffet before heading back to the hotel for a shower and to change.

We then went to explore Machane Ben Yehuda and the Shuk.  Back at the Hotel, it was time to prepare for Shabbat. And what a Shabbaton it was!  The food was abundant and delicious, the services were student-led and as musical as they could be, with the voices of over 300 high school students singing, praying and chanting in unison.   Guest speakers at dinner time included parents of Shalva children who shared their personal stories, as well as members of the first run seven years ago that included students.  However, none can compare to the special guest speaker, Mrs. Esther Waxman.  Her story can be found here. This mother of five gave birth to twins, one of whom was born with Down syndrome.  Shalva was there for the family, helping give their seventh son what he needed.  Then, one day, tragedy struck.  Her eldest son, Nachshon, was kidnapped by Hamas.  In the midst of the chaos, Kalman Samuels, President and Founder of Shalva, came to their house with a suitcase, helped their youngest son pack, and told Esther that he was taking him to Shalva for the duration, not to worry. The story of Nachshon unfortunately does not have a happy ending.  But what was incredible were the last few words she shared with us.  After over 150 000 people, religious, not religious, poured their hearts out in prayer to bring Nachshon home safely, his father, Yehuda, refused to give a hesped.  Instead, he asked the Rosh Yeshiva to share his words with the people:  (I am paraphrasing, forgive me) “Do not be angry, G-d did not let us down.  G-d has given me health, and wealth, and many, many of the things I asked of him.  For this request, the answer was no.  It does not mean he does not care or does not listen. It is as we tell our children ‘no’ sometimes, and we know it is for the best yet they cannot understand why.”  Mrs. Waxman reminded us that we just read in the Parasha that even Moshe Rabenu, who was closer to Hashem than anyone else, was told that he could not understand everything.  So how should we?”

I need not tell you that there were very few dry eyes in the house.

In the afternoon, there were a few options for activities.  The boys decided to hang out around the hotel. The girls and I participated in a meditation tour.  It was rather interesting, to say the least.  We did, however, get a chance to hang out in the fresh air at Gan Sacher on a quiet Jerusalem afternoon.

Mincha and Maariv were held with the same kavod as the morning.  Rav Yair of Toronto, who ran services, gave Grade 10 student Yehuda Bessner a special Aliya with a Shehecheyanu for being in Israel for the first time.  It was a beautiful moment.

Seudah shlishit involved much singing, most of it done responsively by standing on chairs.  Each school at its own table, each trying to outdo the other, much of it animated by Sammy, volunteer extraordinaire and Rav Yair of Toronto.

We had a musical Havdalah, which continued on after Shabbat. The trip was capped off with a tour of the Old City, which included a moving kumzits on the terrace of Yeshivat Hakotel.  The students all made their way down to the Kotel, each taking the time they wanted for personal prayers at the Wall. Many of our alumni who are studying in Israel, as well as some of our former KTM bachurim, came out to visit us. It was wonderful to see them all, how happy they are and excited to be living in this incredible city!

Lastly, the 150 or so students who came on this evening tour,  gather around to sing Am Yisrael Chai and Achenu.  The evening was capped off by Rav Yair calling up all the students who were in Israel for the first time to stand with him beneath the Israeli flag and lead HaTikvah with him.  Both Leora Feld and Yehuda Bessner proudly stood by him.  He then encouraged everyone to take a moment to give each other a blessing, to wish one another well, while standing in this incredible place.

I cannot think of a more beautiful way for us to have ended this trip.

The theme throughout this trip was Marathon. A marathon is run by pushing yourself along, one step at a time, never losing sight of the goal.  As one speaker said, he was facing this incredible steep hill on his first marathon and just as he thought he was not going to make it, an Israeli man he did not know put his arm around him and said “Habibi, na’ase et ze beyachad” (Friend, let’s do this together).  And they did.  The kids were reminded that one of the longest marathons ever run is that of the Jewish people, who Shabbat after Shabbat, just keep going.  We need to learn from this to keep pushing ourselves, to strive for what we know is right and important, to live and not merely exist, and to be a voice for those who cannot be heard.

Before wrapping this up, there are a few people who must be thanked: Shalva Marathon Director Fran Cohen, without whom this would never have happened; you would not believe how much she does in her quiet and unassuming way! Thank you to Deena Levenstein, Fran’s Israeli sidekick who has her finger on the pulse of all that is going on. Thank you to Rav Yair and Sammy for animating Shabbat with passion and humor throughout. And, last but not least, to travel agent extraordinaire, Sandy, for getting us there!

Folks, that is what Shalva does each and every day.  This year, Shalva had its biggest group of runners yet, – over 400 participants – 350 students, of which 10 were from Montreal!  They also, for the first time, surpassed the $1 million mark in their fundraising efforts! Shalva is a model for what can be done for these special needs children and of the successful lives that they can lead.

It has been a privilege to be part of this experience and to see it through the eyes of your children.  Watching them in action, their passion, their sensitivity and their drive gives me great confidence in the future of our community.

May they continue to go Michayil Le Chayil, from Strength to Strength!