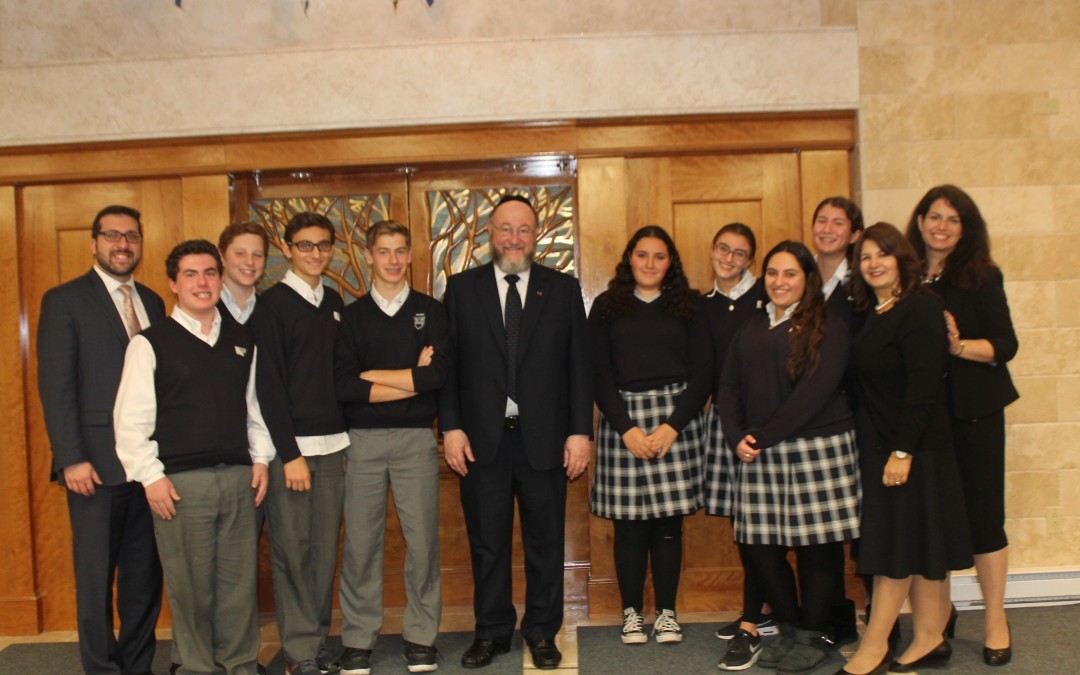 In a memorable, once-in-a-lifetime event, hundreds of students, faculty and staff from local Jewish day schools were honoured with a personal visit from the Chief Rabbi of the United Hebrew Congregations of the Commonwealth. As part of an inaugural trip to Canada sponsored by Mizrachi Canada, Chief Rabbi Ephraim Mirvis spent a couple of hours at Hebrew Academy this morning, where he davened in our minyan, addressed a group of Bnei Akiva student leaders over breakfast, then delivered powerful words of inspiration and encouragement to almost 300 Grades 9 to 11 students from Hebrew Academy, Maïmonide, Herzliah and Bialik.

Rabbi Mirvis became Chief Rabbi in September 2013, having succeeded Rabbi Lord Jonathan Sacks, who called the accomplishments of his successor “the stuff of legend”.  In this morning’s talk, Rabbi Mirvis recounted the story of chemist Alfred Nobel. The inventor of dynamite later founded the Nobel Prizes upon reading his premature obituary and realizing that he wanted to be remembered for having influenced the world positively, rather than for his creation of the destructive material. Rabbi Mirvis encouraged students to pursue life paths that they will be proud of; to make decisions that they will not regret; and “not to make the same mistake as Alfred Nobel did, originally.”

“Yiddishkeit is fun and cool and joyous,” said Rabbi Mirvis, who also implored students to “be proud of your Judaism and use the Torah as your guide”. He underscored the relevance of Shabbat – of taking a break from all things digital – not just for Jews, but for society at large and emphasized that a person’s life is not measured by what they have, but by what they give away – by their good deeds and contributions to society.

Following his empowering speech, Rabbi Mirvis responded to questions from student representatives from each school, and accepted a gift from Hebrew Academy Grade 10 student Isaac Safran, who thanked Rabbi Mirvis with a moving Dvar Torah.