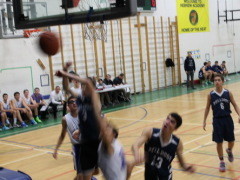 By Yoni Lehrer, High School  Athletics Director and Director of Student Services
Hebrew Academy Bantam Boys squared off against a tough Bialik squad in the JISA semi- finals. The HA Heat were too much for the Bialik Bulldogs to handle as they cruised on to a 20 point win. Meanwhile, in the Hebrew Academy gym, our Juvenile boys faced a very good Herzliah team, which the HA Heat had lost to earlier in the tournament. Through hard work and great coaching, the Heat beat their tough opponent convincingly by 61-41 to move on to the JISA finals.
On Sunday morning our Bantam boys played a very big and tough Maimonide team. They were able to keep up with them in the first half, but the second half didn’t go as planned and the Heat ended up losing.  The Bantam Boys walked away with a silver medal. Congratulations on an amazing tournament!  Thank you to the coaches Ami Drazin and Jake Burak for a job well done.
The Juvenile boys played a very good Bialik team in the finals. It was a six point game at half-time but the Bialik Bulldogs used great 3-point shooting to clinch the victory and the gold medal. Hebrew Academy won the silver medal and proved that the Hebrew Academy basketball program is one of the best in the city.  Our boys represented our school with class and honour and we are extremely proud to say “ WE ARE HEBREW ACADEMY”.  Thank you to the coaches Morrie Levy and Daniel Shaul for an amazing job with the boys!