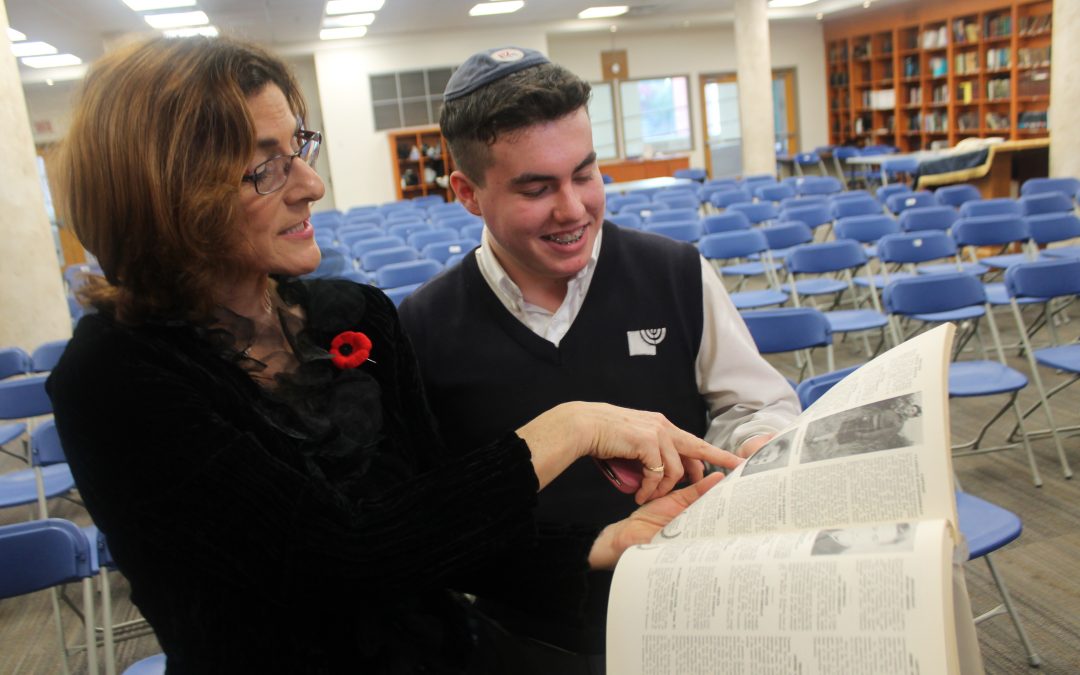 Hebrew Academy Grade 10 and 11 students were introduced to a different set of World War II heroes on Tuesday, in addition to the partisans and martyrs of the Shoah.  Visiting Hebrew Academy in anticipation of Remembrance Day, Toronto journalist and Professor Ellin Bessner expounded upon the subject of her new book Double Threat: Canadian Jews, the Military and World War II. Organized by the Centre for Israel and Jewish Affairs (CIJA) in conjunction with the Bronfman Jewish Education Centre (BJEC), the morning was among a number of scheduled stops to Montreal Jewish Day Schools before November 11.

“At least 17 000 Canadian Jewish men and women served in World War II,” said Bessner.  “I think that’s a record that needs to be recognized and talked about and celebrated.  Probably about 2000 more servicemen and women were Jews that we don’t know about, because many people were afraid to publicize their religion on paper when they enlisted.”

Among those who did identify themselves as Jewish or “Hebrew”, Bessner highlighted a number who maintained Jewish traditions and practices while serving.  Included in her presentation was a picture of soldiers conducting a Pesach seder and a video of a veteran mentioning the Hebrew-Yiddish Bible he had brought along to war.

Bessner also circulated various documents from World War II, including a Canadian comic book celebrating war heroes.  Grade 10 student Matthew Silver was surprised and proud to see a picture of his late grandfather Abraham Silver in another book, Canadian Jews in WWll, Casualties, published in 1947 by Canadian Jewish Congress. Abraham was injured twice while serving in the war, once in France and once in Germany.

“Trooper Abraham Silver, D-131340, Royal Montreal Regiment, of Montreal, was reported wounded in action on August 2, 1944 in the fighting at the Hill 195 (Falaise Gap) after 10 hours of continuous battle,” reads the inscription under his name.  “He was wounded a second time on March 9 , 1945, while evacuating wounded soldiers  during the siege of Veen, Germany….”

Bessner encouraged Veteran Affairs Canada to update its website which “makes no mention of Jews”, while acknowledging the contributions of First Nations, Chinese and black people who served as members of the Canadian Armed Forces.

“The Jewish community has had its roots in Canada for over 250 years, and has contributed to its evolution and development in many ways,” said VP of CIJA-Quebec and Hebrew Academy parent Eta Yudin. “Not insignificantly, Jews participated in disproportionately high numbers in the war efforts of WWI and WWII. Many of them sacrificed everything, and paid with their lives so that we could live in peace and harmony. It is our duty to honor them and remember them.”