A dream fulfilled: Rabbi recounts journey from Ethiopia to Israel 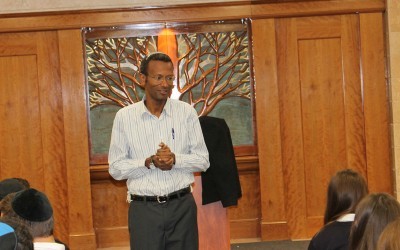 Israeli Rabbi Sharon Shalom was about nine years old  in 1982 when he began the treacherous journey by foot from Ethiopia to Israel – a journey that took two-and-a-half months  and “4000″ victims.  Upon arrival in Sudan, the Mossad escorted Rabbi Shalom’s group to the Red Sea by truck, under the cover of darkness. There, naval commandos escorted them to Israel, where, upon arrival, he kissed the ground.

“I remember my grandfather sitting with me under a shady tree in Ethiopia and telling me stories about Yerushalayim as a child,” Rabbi Shalom told Hebrew Academy Grade 10 and 11 students, in an intimate (and often hysterically funny) address this morning.  Rabbi Shalom is in Montreal this weekend as a Scholar in Residence, thanks to Canadian Friends of Bar-Ilan University and Congregation TBDJ.

“My grandfather said, ‘in Yerushalayim, no one calls you Falasha [a derogatory term for foreigners]’. We call ourselves ‘Beta Yisrael’ – the house of Israel. He told me in Yerushalayim buildings were made of gold. ‘There,’ he said, ‘you will drink milk and eat honey and speak with the Shechina.’ At age 7, I ran with a friend in the direction that my grandfather had pointed to Israel. I just wanted to see Eretz Yisrael. That was our connection in Ethiopia to Israel.”

Originally named Zoldan, Rabbi Shalom was immediately renamed Sharon in Israel. Years after his arrival, he was reunited with the rest of his family members, who were rescued in Sudan in Operation Moses.

Rabbi Shalom engaged students with his humorous account of seeing running water and television for the first time. His emphasis, however, was on the imperative of all Jews to ensure the continuity of the Jewish people. “It is very important not only to be Jewish, But to have a Jewish kop,” he said. “The rate of intermarriage in America is over 60 percent. Today, a person must consider whether his grandchild will be Jewish. In Ethiopia, we succeeded to survive as Jews throughout 2000 years of exile.”

Rabbi Shalom served in the IDF and is a graduate of Har Ezion Hesder Yeshiva in Alon Shvut. Currently, he is the Rabbi of the Or Meofir program for Ethiopian immigrants and a lecturer at Bar-Ilan.