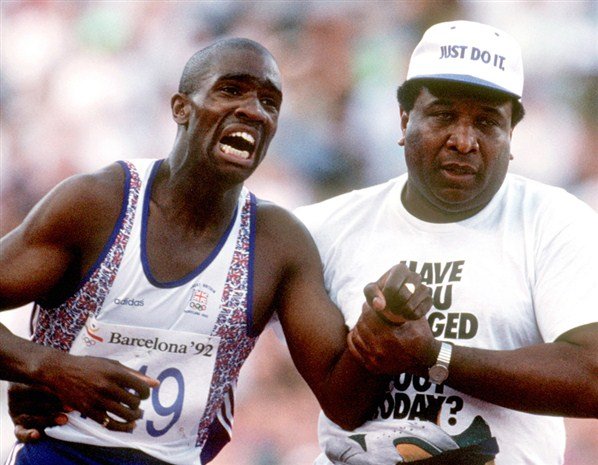 It was the 1992 Barcelona Olympics; British athlete Derek Redmond took his mark as a favourite to medal in the 400 meter sprint.   The starter’s gun fires, and they’re off.  150 meters into the race Derek felt a searing pain in his leg.  In agony, he fell to the ground; he had torn his hamstring.

His dream of medaling turned into a nightmare. After laying on the ground for a brief moment, Derek, not willing to give up was determined to finish the race.  He got himself up and wobbled forward.

All of a sudden a man from the stands broke through security and rushed towards Derek.  He put his arm around him helping him keep his balance.  After a couple of meters, Derek looked up; it was his father.

“Well then, we’re going to finish this together!”

Together father and son continued.

Just before Derek arrived at the finish line, his father let him go to complete the race receiving a standing ovation from a crowd of over 65,000.

From Tisha B’Av, through the month of Elul, Rosh Hashana, Aseret Yemei Teshuva and Yom Kippur, we have been immersed in self-reflection and contemplation.  Where have I been, where am I, and where do I want to be?  How have I acted, how am I acting, and how do I want to act in the future?  Who was I, who am I and who do I want to be?

Personal growth can be a joyous, but painful process.  We’ve worked so hard and may feel right now that we’ve fallen to the ground with our own torn hamstring.

The race is not over yet.  As we get up from pain and exhaustion, not giving up, we set our sights on the finish line, the culmination of the holiday season, Sukkot.  We may struggle hammer and nail in hand, rushing to get all the Yom Tov preparations in order.  And then we will sit, together, friends and family in a Divine embrace.  Hashem telling us: “You’ve worked so hard, you’ve accomplished so much already.  I know you are in pain, I know it hurts.  Let me help you.  I want to give you a hug.”

As we enter our Sukkot, we offer the beautiful tefila:

“May it be your will, my God and God of my forefather’s, that You cause Your Presence to reside amongst us; that You spread over us the Sukkah of Your peace…”

We sit and look around at our beautifully decorated Sukkot, our friends and our families.  We pay attention to the Brachot that surround our lives and bask in the Divine embrace.