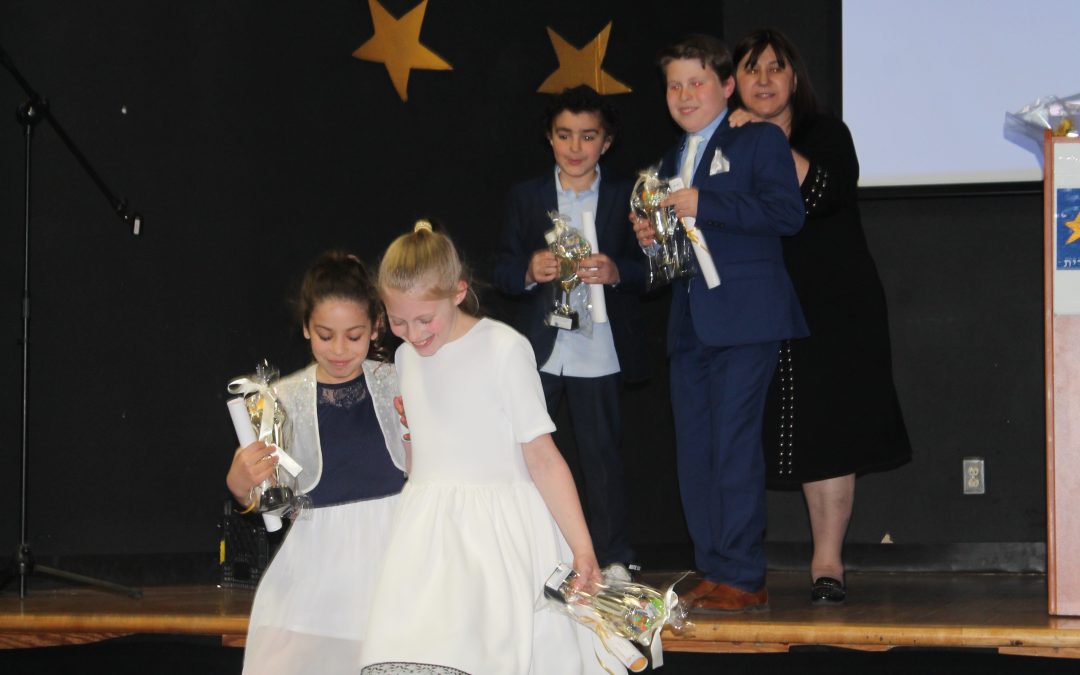 By Aviva Engel, Director of Communications

It was a night that had all the glitz and glamour of an LA production, right down to the pre-show red carpet interviews, celebrity snapshots and tight security. The stars of Tuesday’s Soirée de cinéma d’animation were none other than the Grade 4 A and B producers of nine stop motion animation films expertly created with the help of French Teachers Deborah Bitton, Choula Friedman and Etty Amar, and Elementary French Department Director Dr. Miriam Schrager.

According to the Dragonframe website, stop motion animation “is captured one frame at a time, with physical objects that are moved between frames. When you play back the sequence of the images rapidly, it creates the illusion of movement.”

“The production of animated films is a colossal undertaking,” said Dr. Schrager. “However, as soon as I presented the idea to my teachers, they accepted the challenge without hesitation. The students welcomed the project with incredible enthusiasm!”

Based on classic moral stories, each movie presented a unique lesson. Themes included the consequences of bullying, lashon harah and not giving others the benefit of the doubt; the value of performing mitzvoth; the endeavour to be happy with one’s lot; the ability to overcome obstacles; and the power of each person to make a difference, among others.

Tuesday night represented the culmination of months-long work in the classroom. The students and their teachers have been working on various stages of the project since November. In groups, they penned the script, developed the characters, and narrated, filmed and edited their movies using iMovie and Audacity, an audio editor application. Each group utilized different material for the animation: Playmobil and Lego people made an appearance in a couple, whereas others featured play dough, paper cut-outs and illustrations done by both chalk and coloured pencils.

Highlights of the night included the duo of Benjamin Bendayan and Tehila Haimovici who emceed and a surprise appearance by Grade 4 teachers at intermission; dressed in vintage usher costumes, the ladies distributed popcorn and Oscar-decorated water bottles to the audience.

The evening culminated with an official ceremony where all producers were awarded candy-filled Oscars in recognition of their achievements.

Kol Hakavod to our exceptional producers and their incredibly hard-working and creative  agents, Mesdames Miriam, Choula, Deborah and Etty.

“The project was a huge undertaking but the efforts, work and outcome were extraordinary,” said Dr. Schrager. “I thank Madame Choula, Madame Déborah and Madame Etty for inspiring and accompanying our students on this artistic adventure! Congratulations to all the Grade 4 students! Bravo for your talents and creativity.”

The  evening would not have been possible without the assistance and collaboration of teachers and staff members from a range of departments.  Thank you to everyone who made the night such a success!

Please click here for the complete photo album, with thanks to Amber Kerr-Bates for her contributions.